Main > Intermarriage and life-threatening situations > Baba Sali Appears in Dream of Jewish Boy in Arab Village, Urges Him to Return to His People

Baba Sali Appears in Dream of Jewish Boy in Arab Village, Urges Him to Return to His People 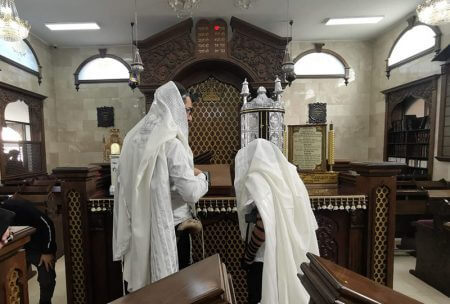 No one davening at the tziyun of the Baba Sali in Netivot last Thursday knew the amazing story behind the Bar Mitzvah boy who was called to the Torah.

The boy, we’ll call him Moshe, was born in a hostile Arab village to a Jewish mother and an Arab father. He was raised and educated as a Muslim, but at the age of six had a dream that changed his life.

An old man appeared to him and said, “Your mother is Jewish, and so are you.”
On waking, the shaken boy ran to his mother to tell her about the strange dream. She assured him that it was nothing and encouraged him to forget about it.
But the dream wasn’t a one-time occurrence. The elderly man kept coming back. “You are a son of the Jewish people, leave the village and return home,” he said.

Finally, having no choice, Moshe’s mother admitted to him she was Jewish and, therefore, so was he. But she wasn’t prepared to leave the village, despite the suffering she endured there at the hands of her Arab husband. As she told the Yad L’Achim staffers who tried to help her, she felt she didn’t have the strength to pick up and begin anew.

But one night, during chol hamoed Pesach some three years ago, Moshe’s mother dreamed about her late father, who told her: “Get up, dear daughter, get up now and leave. This is not your place.” She argued with him, but upon waking understood that this hadn’t been a regular dream. For the first time, she reached out to Yad L’Achim asking for help in leaving the village immediately.

Taking advantage of the fact that her husband worked the night shift at a gas station, she packed up for herself and her son and waited for her rescuers, who arrived two hours after her call to the organization’s hot line.

Yad L’Achim settled mother and son in a secret apartment in Beersheva that was fully furnished and stocked. After a few days of recovery time, the long rehabilitation process began.

Moshe, who spoke only a very basic Hebrew, was assigned a mentor who learned with him every day and helped get him ready to enter a Jewish school at the start of the coming school year, just a few months away.

One day, during summer vacation, mother and son traveled to Netivot to take care of errands. As he was looking out the window of the bus, Moshe spotted a picture that caused him to burst into tears. “Ima, that is the man who visited me all those times in my dreams!”
When she saw the picture he pointed to it was her turn to cry out: “That is the tzaddik, the Baba Sali. Now I believe you.”

After they calmed down, the boy asked to go and thank the tzaddik, but was told that he had passed away many years earlier. Only after leaving the city did they learn that the Baba Sali was buried in Netivot, and they promised themselves to return at the earliest opportunity to thank him.

Moshe started the school year and fit in beautifully with his new classmates. Half a year ago, when he heard his mother on the phone with Yad L’Achim planning his Bar Mitzvah, he insisted that, “my Bar Mitzvah will be in only one place – the shul at the tziyun of the Baba Sali.”
Meir Roshel, the mentor Yad L’Achim had assigned to Moshe, promised to help make it happen. But the boy’s extraordinary connection with the Baba Sali didn’t end there.

“On the day Moshe put on tefillin for the first time, we we succeeded through enormous efforts in bringing him to the house of Rabbanit Simi, the widow of the Baba Sali,” Meir recalls. “She brought us to the tzaddik’s room, where he spent time alone with his Creator, and learned and davened and received audiences. I didn’t know the exact address, just the name of the street – Ben Gurion – but we decided to try and find it.

“When we reached the street, even before we could ask anyone for help, Moshe told me to stop the car at a specific address. ‘This is the house of the tzaddik,’ he said. I thought he was mistaken. I asked a passerby and she said that indeed it was the Baba Sali’s house. I responded, ‘Wow, this is exactly the spot the boy told me about. This is very special. It’s heavenly. How can it be that a boy who grew up in an Arab village, not knowing that he was Jewish or anything about Judaism, merited to have such a great tzaddik come to him and beg him to return to the Jewish people and then bring him to his house? That’s the power of the Baba Sali.’ ”

Last Thursday, a modest, moving ceremony was held to celebrate Moshe’s Bar Mitzvah, together with Yad L’Achim activists.
“Baruch Hashem that we merited to bring him to the yoke of mitzvos,” Meir says. “There was musical accompaniment and a Moroccan paytan. The joy was great. On erev Shabbos parshas Yisro, the parsha in which we read about the giving of the Torah at Sinai and our being turned into the nation of Hakadosh Baruch Hu, we merited to connect a lost Jewish soul to his source.”