Battling for His Fate: Jewish Boy at Yad L’Achim Camp Forced to Return to Arab Village 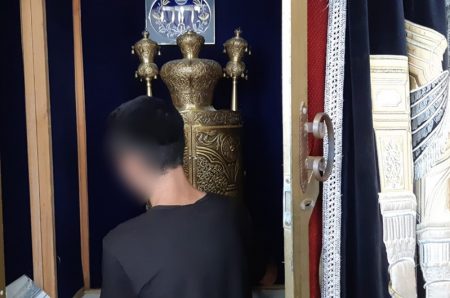 The Torah of Your Mouth Is Good For Me." The child who was returned to the Arab village holds a sefer Torah at Shacharis in the camp.

Some 80 children of Jewish mothers and Arab fathers returned home recently after spending two weeks in camps organized for them by Yad L’Achim. These are youngsters who returned to the embrace of the Jewish people in just the past year after being rescued with their mothers from Arab villages. Their successful reentry into the Jewish world is being made possible with the help of Yad L’Achim social workers and mentors who accompany them every step of the way.

The camps, one for boys and one for girls, were held in two beautiful facilities in a recreational village in the north. The children were treated to a host of programs, including nature hikes and swimming. They also had the opportunity to learn about the Three Weeks – between the 17th of Tammuz and Tisha B’Av – and committed themselves to behaving properly toward friends and showing them ahavas chinam.

“The camps gave the children the kind of close attention they need together with Jewish activities and preparation for the school year,” said Yad L’Achim’s Mrs. Suri Kostelitz, who directed the camps. “They also gave the mothers the breathing space they needed in coping with their complex situation as single-parents mothers who’ve opened a new chapter in their lives.”

The miraculous nature of the camp was highlighted in the story of Ma’or (a pseudonym). At 11, Ma’or was forced to remain in the custody of his Arab father, in a village near Ramallah; the father had pressured the Jewish mother to sign papers that are recognized in Israeli law and that gave him exclusive custody.

Ma’or is permitted to visit his mother just once a month, for a few days.

The mother, who wanted to give her son as many Jewish concepts as possible as well as the chance to meet friends from a similar background, asked to enroll him in the Yad L’Achim camp during the time he was allowed to be with her.

At the end of that brief period, Ma’or parted from his friends with tears in his eyes, knowing the life he was returning to.

“There wasn’t a dry eye in the house among the staff and campers as we said goodbye,” Mrs. Kostelitz recounted. “We could take some small comfort from the fact that the legal battle over his future had not yet run its course, as well as from the knowledge that he had been bolstered by the warm embrace he had received in our camp and that would continue whenver he reunites with campers and mentors.”

In a statement, Yad L’Achim said that “the incident of Ma’or shows us that in addition to the Jewish children who attended the camp and received a joyous, positive experience, there are hundreds more who are still in captivity in Arab villages and can only dream of returning to their people.”

The organization stresses that though the case of Ma’or is complex, its legal department is not giving up. “We won’t rest and won’t be quiet until we bring the story to a happy ending and Ma’or returns to his mother forever,” Yad L’Achim said. “We are confident that pleasant surprises await us.”