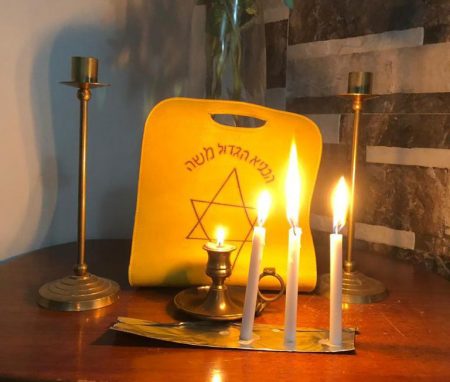 A Chanukiyah in an enemy state

It was a strange phone call, even by Yad L’Achim’s standards. On the other side of the line was A., a young Jew living in an enemy state. He was careful not to divulge many personal details, but from the little he said Yad L’Achim staffers understood that he was serving as an officer in the local army.

In A’s heart a flame had come to life, a yearning for Judaism. But he had to keep his practice of Judaism a secret, for fear of giving away his identity and putting himself in jeopardy. His relationship with Yad L’Achim, developed over the phone, with the organization providing him with guidance, information and assistance in leading a Jewish life.

The relationship between Yad L’Achim’s Harav Yosef and A. developed gradually, giving both of htem time to overcome the mutual distrust that exists between strangers from enemy states. In order to verify A.’s true identity, Rav Yosef got in touch with an acquaintance of A., who lives in the north of the country; only then did the feel free to talk openly with A.

The cross-border relationship drew tighter, with A. inundating Rav Yosef with questions surrounding Halachic issues he confronted, including the time for Chanukah- candle lighting. In the last correspondence between the two, A. noted that he’d lit Chanukah candles inside his home. Afterwards, he asked Harav Yosef, “My brother, how do you in the Holy land do it? Can we speak by phone on the subject of the holy Torah?”

“A. and his family are living as forced converts,” Harav Yosef relates in a voice shaking with emotion. “We made a thorough check to verify his Judaism and his Jewish roots and discovered a family that has done much to preserve its identity despite the great difficulties and dangers. Some of his family members were murdered in a Kiddush Hashem.”

The surprise reached Yad L’Achim staffers during Chanukah. A. photographed his Chanukiyah, in which he lit Chanukah candles with mesirus nefesh and in great secrecy, and sent the pictures to his friend Harav Yosef.

“We were very moved,” said Rav Yosef, “to see how the candles of Jews are alight everywhere in the world. This proves that the flame of the Jewish people will never be extinguished. We hope that in the future, A. and his family will be able to celebrate Chanukah with us, together with all of our brothers, openly and without fear. We are making every effort in this direction.”