Main > Intermarriage and life-threatening situations > For the First Time, We Celebrated the Holidays as Jews

For the First Time, We Celebrated the Holidays as Jews 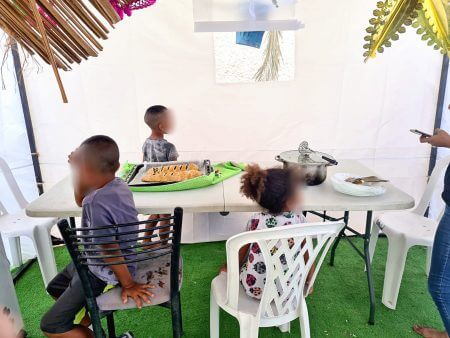 "A kosher sukkah filled with light and warmth and love." The children of the survivor from Hebron sit in the sukkah she had built.

For some, the Jewish spark was ignited on Rosh Hashana. For others, it happened on Yom Kippur. For still others, the experience came during Sukkos, or as late as Simchas Torah. All these woman experienced the powerful emotion of drawing closer to Hashem, of rejoining the Jewish people and of cleansing layer upon layer of dirt that concealed their neshama.

The warm responses that came to Yad L’Achim after the chagim were filled with expressions of joy and gratitude. “Yesterday I touched a sefer Torah and literally cried,” said one woman, who is in the midst of legal proceedings to gain sole custody of her children.
“I want to turn the clock back. I want to go back to lighting Shabbos candles,” said another.

“I cried all Yom Kippur,” said yet another. “I felt that I was where I truly belonged.”

But the most moving story was that of Jewish woman rescued from Hebron after 15 years of suffering, who recently met and married a Jew and established a kosher home. She celebrated the recent holidays with her five children.

In a letter to the social worker Yad L’Achim assigned her, she wrote: “I felt joy like I never ever felt before. We mostly focused with the children on Jewish experiences. After never having a sukkah of our own, I still don’t grasp that I had a kosher sukkah limehadrin, filled with light and warmth and love. We insisted on eating only in the sukkah throughout the chag. Every day is a gift, for which I thank Hashem.”