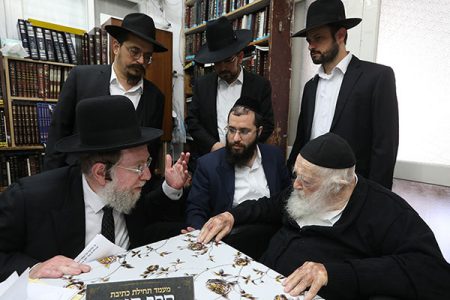 A special delegation of Yad L’Achim leaders met this week in the home of Hagaon Harav Chaim Kanievsky, shlita, to present him with fateful questions, and to ask for his bracha for success in the vital work of Pidyon Shvuyim.

Only parts of the questions can be revealed, due to security considerations. Two of them, presented to Maran by Harav Chaim Deutsch, a senior Yad L’Achim lecturer, involve matters of life and death and of saving souls from falling into a spiritual abyss, lost forever to the Jewish people.

The first question concerns a Jewish woman living with her children in the heart of Chevron, in a neighborhood that is know to be a Hamas stronghold. In the circumstances, a rescue would pose unusual risk to the team going in. On hearing the full picture, Maran paskened “they can do it,” and the operation was given the green light.

Another matter relates to a Jewish woman, a Holocaust survivor, who is over 100 years old and has been staying in a Christian monastery. Yad L’Achim has been trying for some time to reach her in order to bring her back to Judaism before it is too late. She recently agreed receive a delegation from the organization and to be convinced to return to the Jewish people.
towever, the only way for Yad L’Achim to talk to her is to enter a monastery…

Rav Kanievsky ruled that since it was a matter of saving souls, it was permitted to send people into the monastery to bring her out.
Yad L’Achim notes that in addition to ruling on the specific questions brought to him, Maran blessed all those who partner in Pidyon Shvuyim with hatzlacha, adding: Those who help save assimilated children from Jewish-Arab relationships will merit, midda knegged midda, to see nachas from their children.