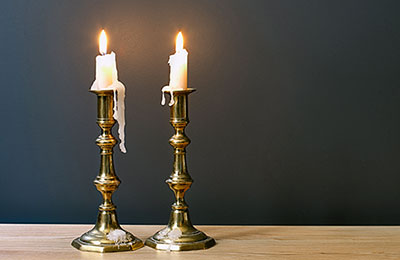 It all began three months ago. Imad (not his real name), a young Jew living in Baghdad, Iraq, reached out to Yad L’Achim’s Jewish Roots Department that works with Jews living in Arab countries. After discovering his Judaism, Imad began learning Torah b’chavrusa every night with an Arab-speaking Yad L’Achim activist and taking huge strides toward mitzvah observance. One of the first things he took upon himself was Shabbos observance.

Just a few weeks ago, Imad told Amir, who runs the Roots Department, of his struggle to keep Shabbos. “He’d asked his employers to rearrange his work schedule so he could take off for Shabbos, and this upset them. They said that if he insisted on the change, he could find himself another job. So he quit and looked for work that enabled him to keep Shabbos k’hilchoso.”

Amir says that Imad’s determination and mesirus nefesh moved staffers in his division. “When we understood that he and his family didn’t know the times for candle-lighting and havdalah, and had to search for them every week, we decided to produce an annual chart and send it to him.”

Yad L’Achim went to great lengths to produce the table for cities in many Arab countries. The cities all had one thing in common: Jews living there, for one reason or another, who were in regular contact with Yad L’Achim and receiving guidance and chizuk.

During these very days, an easy-to-read table is being distributed in Arab cities, some of which are in enemy countries and some in countries that maintain ties with Israel. They are en route to Jews living in areas that offer no contact with other Jews.

Yad L’Achim is preparing an updated version that includes cities in Saudi Arabia, Oman and Bahrain. It is now checking and calculating the times when Shabbos comes in and goes out in these places.

A leading Yad L’Achim official noted this week that “in addition to Imad, we are working with other Jews in Iraq, as well as those in Libya, Syria, Yemen, Egypt and Jordan. The Roots Department is today in regular contact with several dozen people living in these countries. In all cases we’re speaking of grandchildren or even children of Jewish women who married Muslims, while their families left those countries.

Before we bring them along with more practical, meaningful steps, which are better not spoken of, we do an intensive background check to determine their Jewishness. This is an uncompromising process that includes checking authentic documents that leave no doubt as to their being Jews.

“In a few cases, it turns out that the candidates are impostors, people who have distant relatives who are Jews or who are interested in Judaism. However, the lion’s share of those who reach out to us turn out to be authentic. These are babes who were held captive among non-Jews, in every sense of the word. With these, we do everything to bring them back to their Creator and derech Yisrael Saba.”
It was brought to Yad L’Achim’s attention that the calendar came out on erev Shabbos Parshas Balak, which features the prophecy of Bilam. This evil prophet came to curse and ended up blessing the Jewish people for being, among other things, “a people that dwells alone, not reckoned among the nations.”

At the conclusion of the parsha, added the Yad L’Achim official, “We read of the mesirus nefesh of Pinchas, of the preservation of the walls of the Jewish people. These days, as well, we continue to fight for every Jewish soul and for the unknown heroes that most of the nation don’t recognize, not by their names and not by their faces. There are people who are giving it their all, in Israel and abroad, to save the remnants in Arab lands and bring the sons back to their fathers. It is heartwarming to see that with extraordinary siyatta D’Shmaya, the lighting of Shabbos candles are igniting souls in the streets of Erbil and the alleyways of Sana.”

A little light pushes away a lot of darkness. Yad L’Achim’s new chart of Shabbos beginning and end times for Arab cities