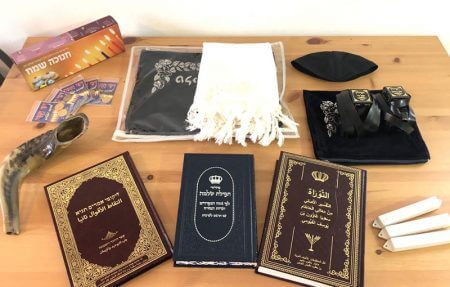 Yad L’Achim’s “Roots Department,” set up just a year ago, is receiving a growing number of calls from Jews in Arab countries and opening new virtual classes for them all the time.

From its inception, the goal of the department was to reach every Jewish man and woman in the Arab or Muslim world – who may be second, third or fourth generation to a mixed marriage – and help them return to their Judaism.

Yad L’Achim works with these Jews in myriad ways, but only after their Judaism has been positively ascertained by experts working with Yad L’Achim.

The department is currently in contact with Jews in Libya, Yemen, Jordan, Iraq, Egypt and Lebanon.

The Roots Department was particularly moved this week when a Jew in his 40s with whom it has been in touch with for several months – mainly via personal contact and virtual Torah classes – decided to take concrete steps toward his return to Judaism, and in this context asked for sacred ritual items.

We’re speaking of a wealthy man who, for the time being, doesn’t intend to leave his country, which meant that we had to send him these items in order for him to be able to live his life as a kosher Jew.

Incredibly, he married a girl from a local Jewish family that had kept its identity secret. Somehow the two got together and were determined that their own two children likewise marry only Jews.

“Besides my great desire to fulfill mitzvos, I want to educate my children in a home that is run in accordance with Torah,” he wrote Yad L’Achim in Arabic, after receiving notice that the package of items would be sent shortly. “Even if it is difficult and requires me to lead a secret life, it is important to me that the children grow up as Jews.”

Since the enemy state in which he lives has experienced much turbulence in recent months, including demonstrations and disturbances in the streets, and there is uncertainty as to the future, the Jew asked that we include as many ritual items as possible in the first shipment. “There’s no way of knowing what will be tomorrow,” he explained, “so it’s better to send everything at once.”

Taking his concerns into account, Yad L’Achim sent out a shipment this week that included Tefillin, Mezuzos, a Kippah, Tallis, Chumash, siddur and book of Tanya – all with Arabic translation – as well as a shofar.

The items were sent directly to a country in Europe where they were picked up by Yad L’Achim activists there. As that country has diplomatic and economic ties with the enemy state, it was possible to send the package from there to its final destination.

“In light of the constant shifts in that country, we decided to add the matzos already now and not wait for the normal shipment that goes out next month,” a Yad L’Achim official explained.