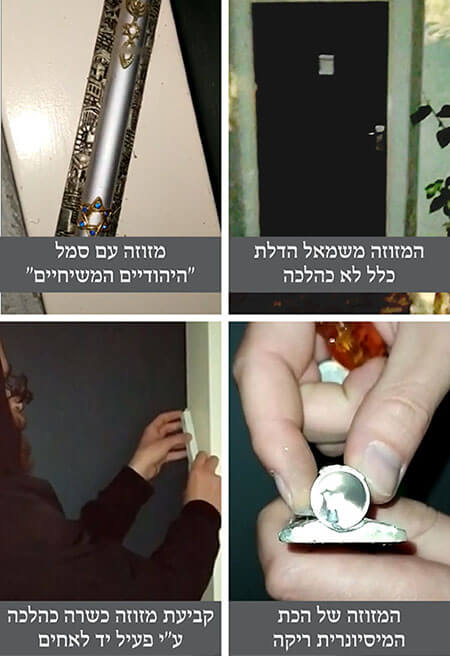 A kosher mezuzah is affixed by a Yad L'Achim activist

In their never-ending pursuit of ways to distance Jews from the G-d of Israel, the missionaries have come up with a new tactic: Selling mezuzah cases that are empty and bear the symbol of the “Messianic Jews” cult.

People buying these cases are certain that they are fulfilling a mitzvah when they affix them to their doors, and bringing blessing to their homes. But in reality, they’ve fallen for a missionary trick aimed at denying them this connection to Hakadosh Baruch Hu and at subtly introducing them to cult symbols in a clearly Jewish context, so that they won’t recoil on seeing them in other settings.

Yad L’Achim recently received photographic proof of this ruse. .A Rav who is active in the north with the Russian-speaking public and who is in constant contact with Yad L’Achim’s counter-missionary department, saw a mezuzah at a large club for the elderly that attracted his attention. For starters, it was on the wrong side of the door. For another, it bore the symbol of the “Messianic Jews” cult.

After receiving permission from the director of the club, he took it down to check its contents and was shocked to discover that it was empty. He quickly replaced it with a kosher mezuzah that he had in his briefcase, and made the brachah of “likbo’a mezuzah” with great emotion. The small crowd that had gathered answered, “Amen.”
“We felt that we were making an important correction for Am Yisrael,” said a participant in the event.

When Yad L’Achim learned that a large chain of furniture stores had begun selling the missionary mezuzah, it appealed to the head of the chain, who is not Torah- and mitzvah-observant. When he understood the seriousness of the situation, he agreed to withdraw from his stores the thousands of mezuzah cases he had bought, despite the financial loss.

“The missionaries continue with their tricks all the time. The empty mezuzah cases they were trying to sell in giant furniture-store chain were meant to get the public used to seeing a cult’s symbol so that they wouldn’t be shocked by it in other settings.

“In these days, on the eve of Chanukah, we receive a tangible reminder that the enemies of the Jewish people, in all generations, seek to get us to forget the Torah of Hakadosh Baruch Hu and disconnect us from His laws.

“We once again appeal to the public: Whenever you encounter a missionary tactic, contact us so that we can take care of it as soon as possible.”