Main > Missionary activities > Senior Missionary Admits: ‘There Is Only Hashem’

Senior Missionary Admits: ‘There Is Only Hashem’ 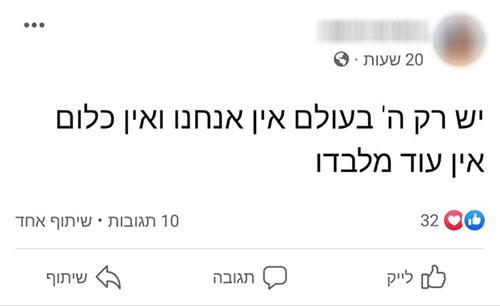 There is only one truth. The authentic message published by the missionary who returned to his people and the Torah.

Chaim was born and raised on a kibbutz in the north, between Tzefas and Carmiel. His home was religious and he learned

in yeshivah, but didn’t show much interest in his studies.

At a certain stage, he decided to embark on a search for the meaning of life. Lacking guidance from parents or teachers, he fell under the influence of missionaries from Carmiel. By misquoting psukim and taking things out of context, they managed to lure him to “Messianic Jews.”

The only ones who tried to keep him from joining the Christian cult were staffers from Yad L’Achim’s Haifa branch who are in charge of all the organization’s counter-missionary activities in the north of the country. They regularly take up positions at the entrance to the missionary church to alert prospective members as to its danger.
“It is a cult of liars and cheats,” the activists warned Chaim, to no avail. “It is Christianity dressed up as Judaism.”

Chaim was a stubborn, diligent genius. When he decided to do something, nothing could dissuade him. Once he understood that evangelical Christianity – to which his church belonged – required its members to convert as many Jews as possible, he committed himself fully to the task.

He turned into a fiery preacher, delivering his sermons on a variety of platforms in an attempt to attract people in search of faith and a new path in live.

Yad L’Achim activists didn’t give up on Chaim They kept trying to set up a meeting between him and one of the organization’s theological experts. But Chaim refused to cooperate.

The activists decided to try something unconventional. “Don’t speak to us, just listen to this question,” they said at one of their encounters, tossing out a question 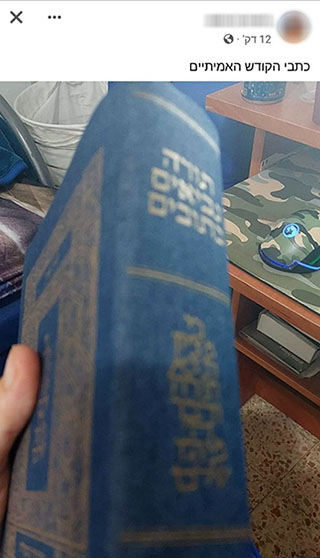 that undermined the Christian faith. “You have to admit that it’s a tough question. Why don’t you enter our website, on theological topics, and get answers.”

On the surface, Chaim appeared unmoved. But something penetrated. He entered the site and learned things that shook his Christian beliefs even more.
For a full year, Chaim studied the material on the site and tried to poke holes in the arguments, with no success. This led him to read more Yad L’Achim material on the internet, gradually opening his eyes to the truth. On Erev Shavuos he posted on-line: “There is only Hashem in the world, we are nothing. There is none but Him.”

Later, Chaim wrote his missionary friends that he had had serious questions about Christianity and that after a long internal journey understood that Moshe is truth and his Torah is truth. He followed up by removing from his site the sermons he had toiled over for years.

Following all of these dramatic developments, a meeting was arranged between Chaim and Rav Binyamin Kluger, a senior Yad L’Achim official who was once a prominent missionary. In their meeting, which lasted many hours, Chaim shared details of his life including the theological question raised by the Yad L’Achim activists that proved to be a turning point.

“The question bothered me at first, but I was sure there would be a fitting answer to this ‘ridiculous’ Yad L’Achim challenge, as we’d been taught by the church. I sat for hours trying to solve the quandary but it created a domino effect, with one question leading to another. Before long it became crystal clear that I was heading in the wrong direction, living a complete lie. The failure to take studies seriously in my youth, and learn about Judaism, had come back to haunt me, making it easier for missionaries to brainwash me.”

Chaim added: “The missionaries are very nice to you as long as they see a possibility of trapping a Jew. But when they find out that you’re not interested in them, they turn very aggressive and dangerous. That’s what it was like with me the minute they saw my posts about leaving Christianity. I received hundreds of notices, some of them threatening, from my previous ‘friends.’
“For nine long years I was in the cult. Now I’m beginning my return to Judaism and will try to influence all the Jews that I dragged into the cult and bring them back. It’s never too late.”