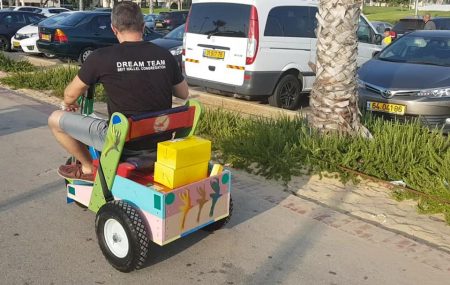 It happened on a Shabbos afternoon, at the busy Pirate Park in Ashdod. Three cult members distributed missionary material, in violation of the law.

With their eyes hidden by sunglasses, the three were caught trying to persuade parents and their children to accept booklets titled “Awaken,” which preached conversion to Christianity and adoption of its values relating to education and children.

Fortunately, residents who picked up on what was going on warned passersby, but Yad L’Achim sources stress that this wasn’t the first time missionaries openly violated the law forbidding attempts at converting minors.

“They take advantage of the fact that our people are Shabbos-observant,” one Yad L’Achim official said, and “try to carry out their plans at the height of the holy day, thinking that this way they won’t get caught. We were happy to see the heightened awareness among local residents, who were shocked by such disgraceful behavior, and call on the police to pay serious attention to our appeals that they use a strong hand against lawbreaking missionaries.”

Even residents who are not religious contacted Yad L’Achim to express their disgust at what had happened. One wrote Yad L’Achim on Motzaei Shabbos: “This was our call for help. No one wants this kind of material to enter his home, or to see these ideas disseminated here. I was shocked to see these pamphlets, with verses from the Tenach that were distorted by strange interpretations. We are living in the state of the Jews, and want it to remain that way.”