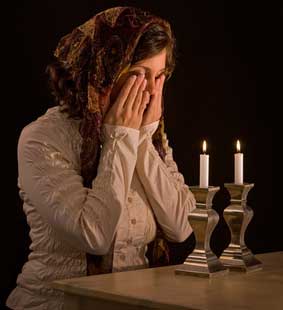 More than a hundred Jewish women and children who were rescued from Arab villages participated in an uplifting Shabbos organized by Yad L’Achim at Moshav Tsafria.

The retreat was originally scheduled to be held this past Shabbos in a hotel in Ashkelon, but last Wednesday, after massive missile fire from Gaza placed Israel’s south on high security alert, Yad L’Achim chairman Harav Shalom Dov Lifschitz ordered that the venue be changed.

Weeks of preparations were scrapped, and staffers worked round the clock to find a suitable location – the guest house at Moshav Tsafria – and to organize transportation, meals and activities.

The women and their children from around the country arrived Friday on buses chartered by Yad L’Achim. The program began at 1 p.m, with a riveting talk by a woman who had returned to a life of Torah Judaism, followed by a question-and-answer sessions that lasted almost until the start of Shabbos.

One of the emotional highlights came at candle-lighting, as these women “survivors” approached two tables in the dining room filled with hundreds of Shabbos candles. With tears streaming down their faces, they lit candles and uttered silent blessings for their children, who face many hurdles on their road back to Judaism.

As they made their way to Kabbalas Shabbos, they were each given a beautiful, inscribed siddur.

A Rav spoke to themFriday night, spicing up the delicious meal with words of Torah, faith and astounding stories. At the conclusion of the meal, the survivors introduced themselves and shared the miracle of their rescue. They concluded their words with a prayer, a request from Hakadosh Baruch Hu, to which all the others answered a heartfelt “Amen!”

In recounting their stories, several said that they felt like angels had helped them escape the captivity of the Arab village. The inspiring tales brought tears to the eyes of Yad L’Achim activists and even to the cooks and kitchen staff.

It was hard to believe that these survivors, basking in the light of Shabbos, were only recently trapped in Arab villages, yearning for a way back to Judaism.
On hand throughout Shabbos were experienced women educators and counselors to talk to the survivors one-on-one and offer advice and support. At the same time, Yad L’Achim’s Education Department ran special activities for the children so that the mothers could participate fully in all the programs.

It was particularly inspiring to see these pure children, who could so easily have been raised as Arabs, with a hostility to Jews and Judaism, singing Shabbos songs, reciting blessings over their food and listening with rapt attention to stories of righteous Jews. They recited Tehillim, as Jewish children around the world do on Shabbos, with a sweetness that reflected the Divine presence and the holiness of the day.

At the conclusion of the Shabbos, the survivors offered profuse thanks. “My Arab husband was very wealthy,” said one woman who came with her four children. “I have been in the most luxurious hotels in Eilat and abroad, but I enjoyed this spiritual Shabbos much more than any of those vacations.”
Many women said that they would continue on their new path, despite the hardships. Some said they would try to draw others closer to lives of Torah and mitzvos, and would warn women from falling into the honey trap of marriage to Arab men.

A melavah malkah was held Motzaei Shabbos, complete with a band and a special program. The survivors shared stories of how they had become strengthened in Torah observance.

Yad L’Achim activists approached the women discretely to learn whether they were lacking for food, had a place for the Pesach seder and if the children needed help in registering for Torah schools.

Yad L’Achim chairman Harav Shalom Dov Lifschitz arrived toward the end of the evening and addressed the women. “We are at the end of the month of Adar when the Jewish people have great mazal,” he said. “You must know that in this month you were granted special mazal to overcome difficulties along your new path. You must also know that the neshamos of all of Am Yisrael are equal, that all were hewn from the kiseh hakavod.

“You each have the strength and potential to become stronger, to rise ever higher as mitzvah-observant Jews.”

He concluded that Yad L’Achim cannot rest on its laurels. “When we see the survivors who changed their lives to holiness and light, we must work harder to save other Jews who are still trapped in Arab villages,” he said.