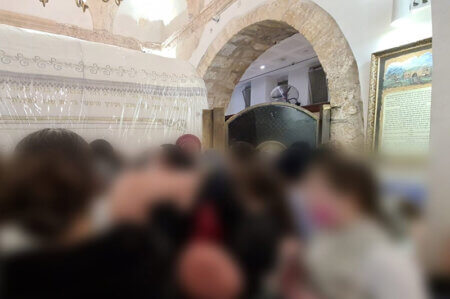 Some of the survivors in prayer at Kever Rachel.

Dozens of Jewish women rescued from Arab villages by Yad L’Achim in the past year raised their voices in heartfelt prayer yesterday at Kever Rachel Imeinu in Beit Lechem.

The women arrived in special chartered buses that brought them from all over the country, including from safe houses, for this special event.

Among them were women who had been rescued from hostile Arab villages and settings like the Shuafat refugee camp, Qalansawe, Yata, Tulkarm, Rahat and Isawiya.

At first, the women gathered in a hall in the Gilo neighborhood for a gala meal and a chance to get to know one another. “Such opportunities for the survivors to meet are very important and give them a lot of strength,” explained a Yad L’Achim official.

A Yad L’Achim social worker gave an example of how these encounters are helpful.

“One of the women that I am closely involved with came with her 14-year-old daughter, who shared that her Arab father, who had not been in touch with her, suddenly reached out and expressed a desire to meet her,” the social worker said. “I sat them next to another mother and daughter who’d gone through the same thing a few years earlier, and seen how it ended up badly for the daughter. The message was clear, and no one could have said it better than those who’d experienced it.”

During the meal, Rabbanit Orit Solomon prepared the women for their visit to Kever Rachel Imeniu. She told them the story of the matriarch, described her difficult challenges and spoke at length about the power of remaining silent and giving in. The women connected to the words, and the message, listening in rapt attention.

After the meal, the women returned to their buses and continued the short distance to Kever Rachel. On their arrival at the holy site, they cried out in unison, “Mizmor l’Todah,” an expression of gratitude to Hashem for taking them out of captivity. They also pleaded for help – for themselves and their children – in continuing their journey back to the Jewish people.”

Mrs. Suri Kostlitz, the coordinator for Yad L’Achim’s counter-assimilation division, spoke of the impact of the visit on staffers and volunteers.

“It was moving to see the results of our sacred work,” she said. “There’s no way to describe the sense of satisfaction we felt at seeing the women we merited to bring back to the Jewish people and how, with G-d’s help, they had changed their lives. With each event, each encounter, we witness the advancement and personal growth of these strong women, the way they are building themselves, and becoming more independent, more closely connected to the Jewish people.”

Quoting the verse, “Rachel is weeping for her children; she will not be comforted for her children for they are absent,” Mrs. Kostlitz added: “There is no doubt that Rachel Imeinu weeps for all those who aren’t with us, but who are still in the Arab villages. During our prayers here, with our tears flowing like water, the spark that is deep inside of each of you heroic women, who for years were torn away from the Jewish people, was transformed into a powerful spotlight.”

Yad L’Achim stresses that “our staffers are davening for our donors and for the Jewish girls who haven’t yet merited rescue.”
After the visit to the holy site, the participants remarked that the experience had strengthened them and given them renewed strength to advance on the new path they’d embarked on.