The ‘Shabbos of Return’ for Yad L’Achim Survivors

It’s Motzaei Shabbos and there are three stars shining brightly outside. Inside, in a hall packed with dozens of women, there are eyes sparkling with joy.
“I decided to keep Yom Kippur fully,” says M, summing up the meaning of that special Shabbos for her.
“For the first time in my life I’m not ashamed to tell my story and speak honestly about who I am, because everyone here has the same story,” adds Z.
“I feel like I’ve really advanced, and feel joy at being closer to Hashem,” admits N, a young girl from a traditional home whose life story has seen dramatic twists and turns.

This is the scene during the final moments of “Shabbat Yad L’Achim,” held just before Rosh Hashanah. “A breath of fresh air,” says R., another Jewish soul rescued through the dedication and ahavas Yisrael that is so much a part of the veteran outreach organization.

The feedback kept coming even days after the special Shabbaton ended. “I am convinced that in the merit of the Shabbos that I kept I found important documents that were lost in the Sharia [Muslim] courts, and that I needed to get my divorce,” wrote H.

Some 100 Yad L’Achim clients and their children participated in the special Shabbos organized for them under the banner “The Goal Is in Reach.” Yad L’Achim did everything to make the Shabbos magical, an experience that participants would take with them for the rest of their lives.

The timing, erev Rosh Hashanah, gave the Shabbos a special, spiritually uplifting feel. The young women were determined to take advantage of every second to collect merits for themselves, for souls that had taken so many blows over the years, before they finally returned to their people. Meanwhile, the children were off on their own, participating in fun, educational programming crafted especially for them by Yad L’Achim personnel.

The spirit of Harav Shalom-Duber Lifschitz, zt”l, the legendary founder of Yad L’Achim, hovered above the event. Harav Lifschitz, who dedicated his life for his brothers and sisters in distress and captivity, initiated the Shabbatonim for those rescued from problematic family situations, with the goal of giving them a taste of the holiness of Shabbos.

The erev Rosh Hashanah Shabbaton was 24 hours of unity, of being bound by a common destiny. Each survivor’s story was different, but there were enough points in common to draw them together in a common identity, joined together by empathy and mutual understanding. 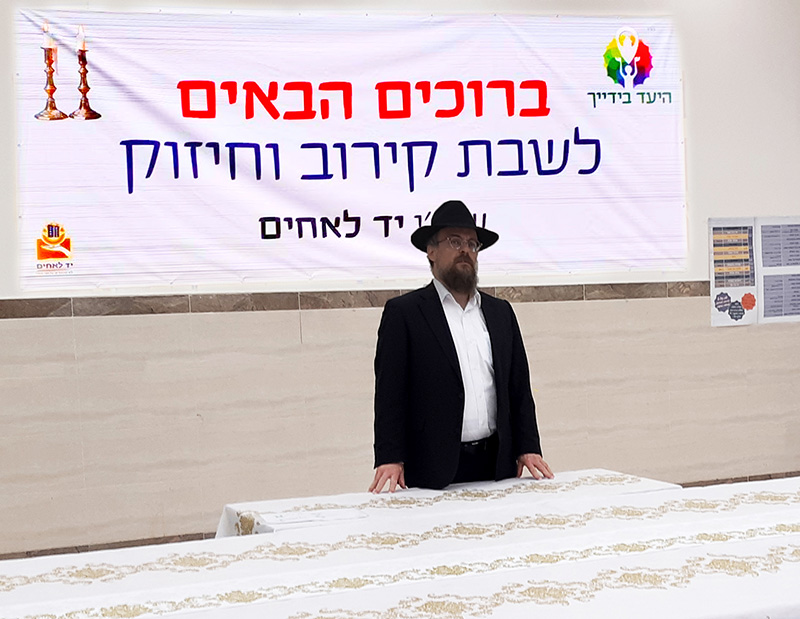 The Shabbos was opened by Harav Yisrael Lifschitz, the chairman of Yad L’Achim, who spoke of the mitzvah of Bikurim, the bringing of the first fruit, described in the weekly Torah portion. He applied the theme of the mitzvah to their lives, focusing on the need to give thanks to Hashem by viewing life through optimistic lenses. He noted that the Shabbaton was being held on the eighth yahrtzeit of his father, Harav Shalom-Duber Lifschitz, zt”l, and was being dedicated to his memory.

On Friday, before the onset of Shabbos, the performer Lea Dror put on a moving show, “Give Me a Neshama.” Leah, a righteous convert, told the story of her special father who married a non-Jew with whom he had two children. One day he decided to return to Judaism, and brought his whole family with him.

At the end of the performance, S. approached Yad L’Achim’s programming director and said: “The most moving message for me was how the Creator does not abandon anyone, even one who has sinned! Even a Jew who married a non-Jew merited Heavenly mercy, and Hashem gave him the merit to return to his people with his family… this message gives hope to each one of us, wherever she may be.”

Shabbos candle-lighting was, as always, a moving moment. Among the women gathered around the candles, their faces covered by their hands, was a young woman who was openly lighting Shabbos candles for the first time in her life.
The schedule was crammed with activities. There were workshops in which the women introduced themselves and in which they learned to set goals for the coming year. There were sumptuous Shabbos meals, with songs that fed the soul. Rabbanit Orit Salomon delivered an uplifting talk on “Closeness to G-d Is Good for Me,” and shared her own inspiring story. There were heart-to-heart talks that continued late into the night, chances to express feelings and doubts, people to talk to, to seek advice from.

In the morning, there was a spiritually charged Shacharis attended by more than 100 women and their children, who until recently knew only the Friday prayers of Islam. There is no doubt that their heartfelt prayer broke through the Heavens. The feeling was so intense that the women literally had difficulty putting down their siddurim and asked for a chance to remain in shul after davening.
A parallel program was run for “second generation” survivors, young Jewish girls who have Arab fathers and are likely to experience identity confusion. In order to solve this significant conflict, Yad L’Achim ran workshops and activities that focused on their difficulties and strengths. The central topic was “Who am I?” – Jewish Identity.

The busy program continued until the end of Shabbos. There were activities on motherhood, and a moving lecture from Rabbanit Yona Nusbacher on the honor of Shabbos. During her talk many of the participants expressed their determination to keep Shabbos from now on.

The final event came at the end of Shabbos. One by one, the women stood up and shared with the group their personal stories and expressed heartfelt thanks for Yad L’Achim’s assistance, emotionally and financially. They singled out the social workers and activists who are always there for them.

For their part, Yad L’Achim staffers, who organized the Shabbaton and accompany the women throughout the year, ended the Shabbos with a great sense of satisfaction. “We definitely felt rewarded for our efforts,” said one. “We see that women who came from such a low, difficult place are capable of overcoming their difficulties with the emotional support they receive from Yad L’Achim’s social workers. The spiritual progress of the families, the light in their eyes, all this gives us the strength for an additional year of activity, with G-d’s help, for the sake of the lost souls of Am Yisrael.” 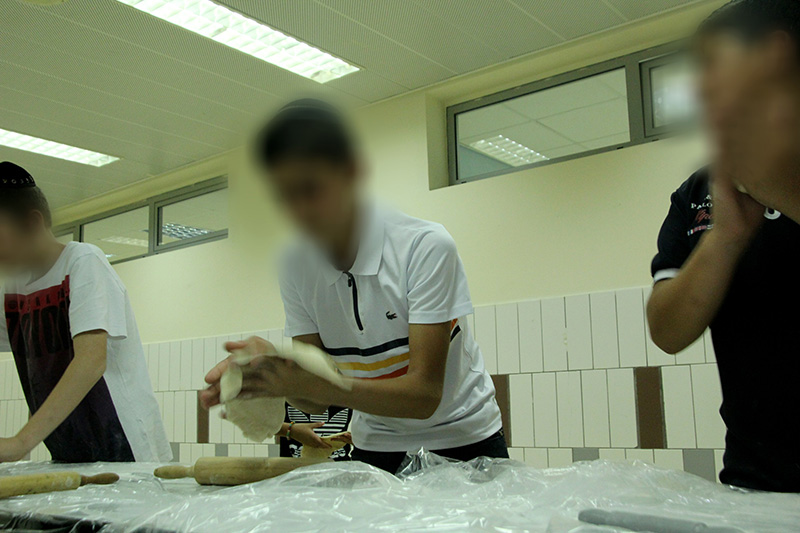 The children of the participants bake challah for Rosh Hashanah. 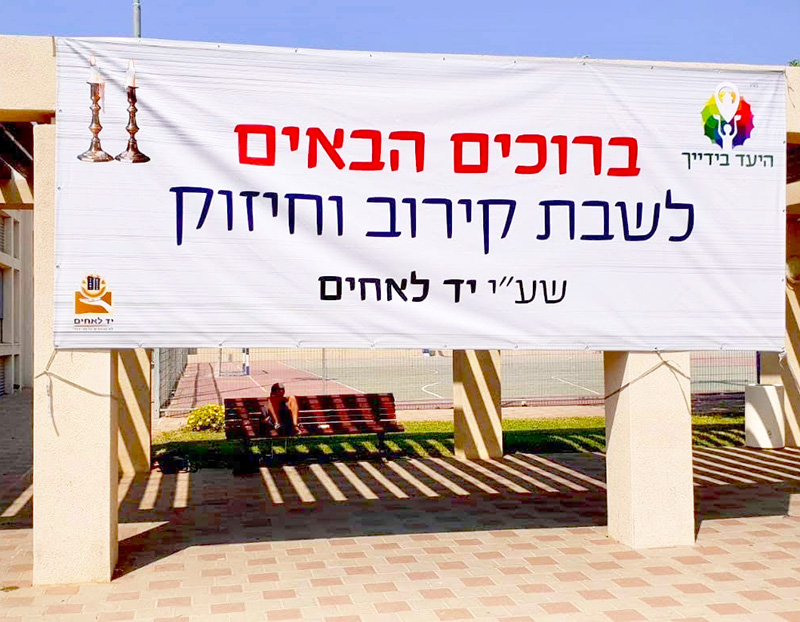 Welcome – the sign that greets the women and their children. 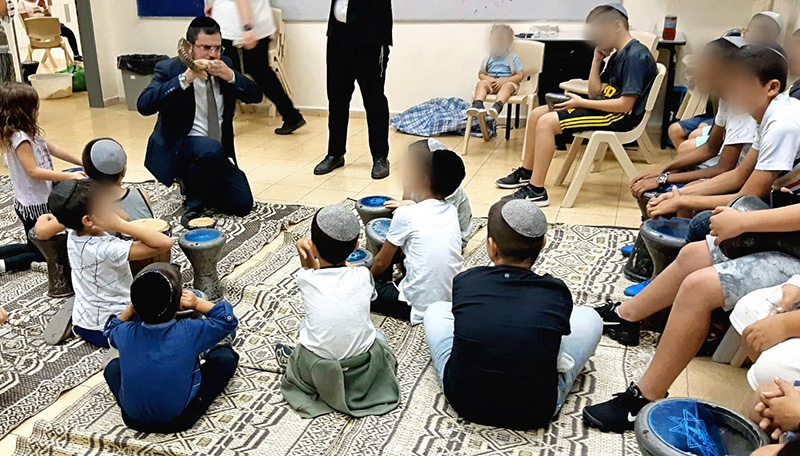