“We’re going to kill you and your kids” 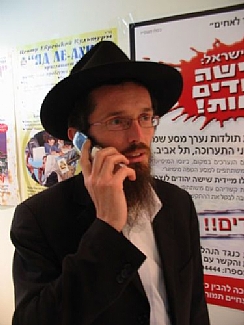 Last Friday afternoon the phone rang in the Yad L’achim offices in Jerusalem. The person on the other line asked to speak to Rabbi Binyamin Klugger who is a senior activist of the anti-missionary department in Yad L’achim. When Rabbi Klugger took the call the person introduced himself as Hannania C. a member of a messianic congregation called “Mevaseret malchut” that is headed by Shimon Nachum.

He told Rabbi Klugger: “I want you to stop mixing into other people’s lives.” When Rabbi Klugger asked him what he was referring to, he replied angrily, “there are a lot of people in our community who want to convert to Judaism at the rabbinate and you are preventing them from doing so.”

Many members of the missionary groups appeal to the Rabbinate with all kinds of fraudulent excuses why they want to convert to Judaism. That way these missionaries later obtain citizenship as a result of the Law of Return and that way they are free to set up base in Israel and engage in “shmad.” Yad L’Achim is doing everything to thwart this move and to expose them.

Rabbi Klugger himself is a Ger Tzedek (full fledged convert to Judaism). In the past he was a missionary in France. As a senior missionary he was instructed to be very active mainly amongst the Jewish community since they are the “chosen people,” and it is most important to get them to convert to Christianity. He started to observe and learn about Judaism but in the end he decided to convert to Judaism himself. He started his conversion process by Rabbi Eli Dahan in northern France and concluded it Halachically by Rabbi Ezra Batzri in Jerusalem. Today he is one of the heads of the missionary department at Yad L’Achim and knows how to counter these missionaries.

After the missionary on the phone finished his complaints, Rabbi Klugger explained to him the deception, conniving tricks and lies they employ at the rabbinate, a ploy that runs against the missionary belief itself. At that point the voice on the other line started threatening: “I advise you be careful because we are going to deal with you gradually.

Rabbi Klugger told him that his threats will not deter Yad L’Achim from combating shmad. The missionary on the other line said: “After we deal with you we will deal with your children, they will die one by one.”

Yad L’Achim is very concerned about the missionaries’ physical violence, this exposes their true colors. Rabbi Sholom Dov Lipshitz, Chairman of Yad L’Achim instructed Rabbi Klugger to report the threat of murder to the police.

Rabbi Lifshitz said, “there is no doubt that Rabbi Klugger’s success is a result of his experience when he worked as a missionary himself, he is well acquainted with their deceiving tactics and this drives them out of their minds. But,” he added, “the authorities have to act fast before it is too late.”