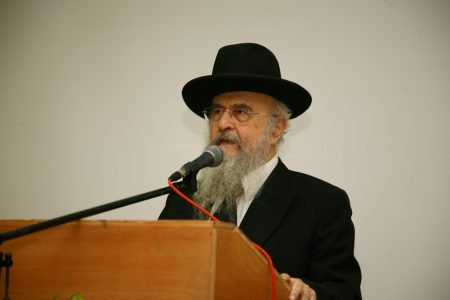 The event brought together not just the women, but their proud families, who came to express gratitude to Yad L’Achim for returning their daughters and sisters from captivity.

Rabbi Shalom Dov Lipschitz, chairman of Yad L’Achim, set the tone of the evening in his opening remarks. “This an evening of support, a salute to your Jewish strength,” he told the women. “The Talmud tell us that only four women are called Matriarchs, since these were the holy women who gave their Jewish daughters the strength to continue in their path. The entire episode of Sarah Imeinu being taken to the home of Pharoah, king of Egypt, and then emerging safely was in order to give you – righteous women – and other women in your situation, the strength to overcome the difficult trials in which you found yourselves.”

Rav Lipschitz concluded his uplifting message with words of encouragement. “Your dedication and willingness to sacrifice for the sake of your children receiving an authentic Jewish education makes you righteous women, in whose merit the redemption will come speedily,” he said.

There wasn’t a dry eye in the hall when the women stood up and committed upon themselves to Torah observance. Women who until recently were living in Arab villages with their children poured their hearts out, as they recited Shema Yisrael.

At one point, 15 women got up and, one after the other, and announced that they would take upon themselves an additional commitment. One promised to be careful with Netillas Yadayim (washing hands) in the morning; another said she would strengthen her observance of the Sabbath; another pledged to be more careful with the laws of modesty. Their moving commitments set off a chain reaction in the room. Some 50 women said they would also be more careful with Netillas Yadayim. In every corner of the hall, one could see another spark lit.

Afterwards, the women heard the story of M., the daughter of a Muslim sheikh, whose story was so similar to theirs.

A lottery was held with the grand prize being NIS 1,000 in cash. The winner, a woman who is in extremely difficult financial straits, announced that she was donating half of her winnings for another lottery that would give another survivor a chance to win. Another drawing was held on the spot.

The women were honored by the presence of the Vasloi Rebbetzin and the Rabbanit Abuchatzeira, who spoke to them of the great merit of their actions.

The evening was also graced by the presence of Mrs. Atias, wife of Housing Minister Rabbi Arial Atias, who thanked Yad L’Achim for giving her the opportunity to participate in the moving event.
The next day, the offices of Yad L’Achim were swamped with phone calls from mothers of the women “You have no idea what you did for the hearts of our young daughters,” said one mother. “What we couldn’t achieve in long soul-searching talks, arguments and tears, you achieved in one moving evening.”

Reflecting on the significance of the evening, Harav Lifschitz said its goal, besides giving a boost to these survivors, was to send a message to many other women in similar circumstances that they have the strength to overcome these difficulties and return to the Jewish people.