Main > Intermarriage and life-threatening situations > ‘Are You Sure I Can Come Back After Converting to Islam?’

‘Are You Sure I Can Come Back After Converting to Islam?’ 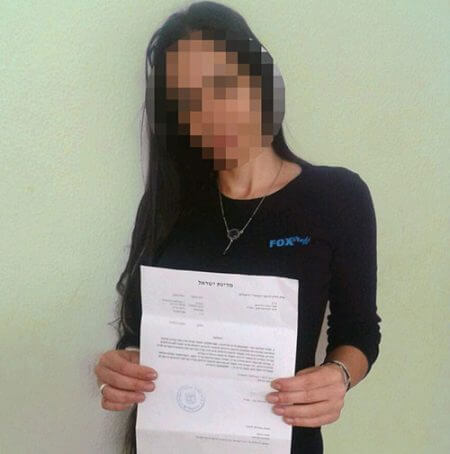 A moving drama came full circle in Yad L’Achim’s head offices recently, after a woman learned that she could reverse the terrible mistakes of her youth and rejoin the Jewish people.

The heroine of the story is T., 28, from Caucasus. She immigrated at the age of 13 and two years later met a young Arab in northern Israel, not far from her home town. For T., a relationship with an Arab was not at all strange. Her mother and grandmother had married Caucasian Muslims and she viewed mixed marriages as the norm.

Heeding the wishes of her Arab boyfriend, T. converted to Islam and married him. They lived in Karmiel and had a daughter. When life became unbearably difficult, T divorced her husband and moved to Tel Aviv, continuing to see her ex-husband occasionally when he came to visit their daughter.

The next two years were difficult for T., as she failed to pick up the pieces and start life anew. Feeling defeated and hopeless, she moved back in with her ex-husband in his home in an Arab village in the north and had a baby boy.

A few weeks ago, T. brought her baby for a visit to the mother-child health clinic in Haifa. While the husband waited outside, the nurse noticed T.’s distress and asked for details. When T. broke down and told her story, the nurse suggested she contact Yad L’Achim for help.

In her first conversation with the operator on duty at the Yad L’Achim hotline, T. revealed that her greatest concern was her conversion to Islam. “Once you convert to Islam,” she said in utter despair, “there’s no way back. But could I at least convert to Judaism?”

T. had never been told that conversion to Islam was not irrevocable and that Hashem, in His goodness, always opens the door to those who knock with Teshuvah.

Once Yad L’Achim verified that T. was indeed Jewish, officials explained to her that the way back to Judaism was relatively simple. She didn’t need to convert, but only to go through a relatively simple “return to Judaism” procedure.

T. was shocked. “Are you sure?” she kept asking.

After being reassured, she immediately declared that she and her two children were returning to the Jewish people.

Last Sunday, in a meticulously planned rescue operation, Yad L’Achim extricated T., her two children and their belongings from the Arab village and brought them to a safe house in a Jewish community in the center of the country. She is undergoing rehabilitation with the help of a social worker assigned to her by Yad L’Achim.

T. recently visited the head offices of Yad L’Achim and met with her social worker and with Rabbanit Lifschitz, the wife of the legendary founder of Yad L’Achim, Harav Hagaon Shalom Dov Lifschitz. The Rabbanit is personally involved in all of the activities of the organization, but especially in its counter-assimilation efforts.

“I never imagined that there could be an organization that dedicates itself totally to others and to people who have gone so far afield,” T. said. “Such giving, such deeds, one finds only by Jews.” 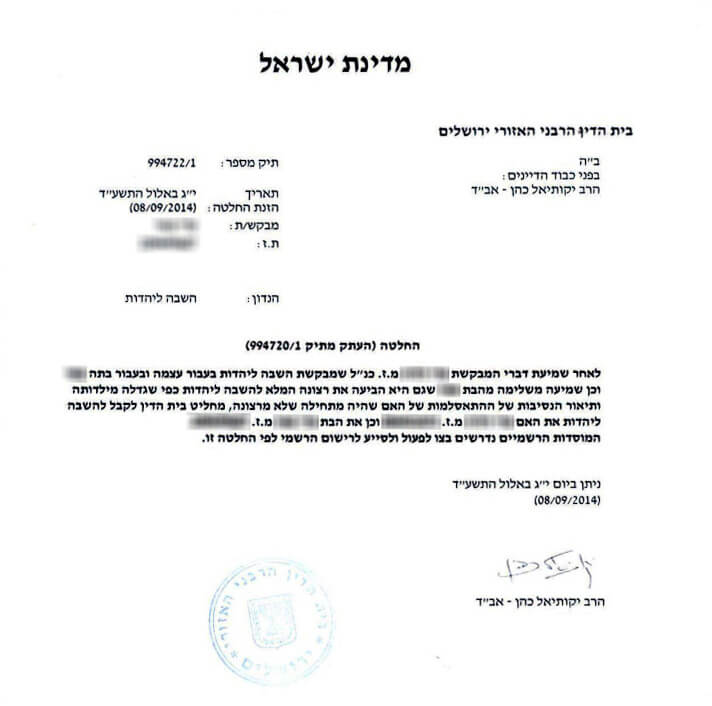 This document, issued by the religious court, confirms that T. has returned to Judaism.