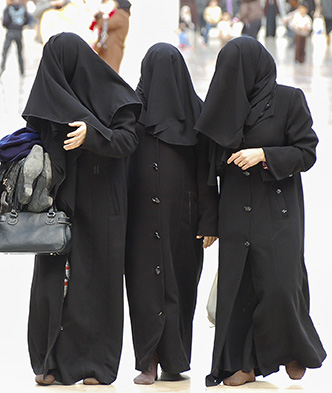 This illustrative photo was purchased from the FOTOLIA site.

Three women who grew up thinking they were Muslims, only to discover that they are Jews, turned to Yad L’Achim in the past month seeking assistance in returning to their people.

The three, aged 21, 30 and 40, were born to Jewish mothers and Arab fathers and raised in Palestinian villages as devout Muslims.

“To discover at such a late age that you have a different identity than the one you were raised with is very difficult,” said a social worker at Yad L’Achim, which has been on forefront of the battle against cults and intermarriage. “The treatment in such cases is different from that we give to women who were raised as Jews, married out and then seek to return. These three were adults when they discovered that they were Jews, with all that implies.”

One of the women, A., was born and raised in Kalanswa as a Muslim Arab. A month ago, at the age of 30, she discovered that she was a Jew after a relative shared the secret that her mother had been Jewish. A. checked things out for herself and succeeded in uncovering official documents confirming the information.

“When I became aware, almost by accident, that I’m a Jew, I was beside myself,” A. said. “After I verified the information, I began to quietly get interested in Judaism and was told about an organization that cares for women like me and helps bring them back to the Jewish people.”

The next step was dramatic and speedy. “I made contact with Yad L’Achim and decided to leave the village and start life anew,” A. recalls. “I progressed little by little, lighting candles, davening and becoming very connected to Judaism. I want to thank the people of Yad L’Achim who rescued me safely, without leaving a trace as to my whereabouts, and who continue to accompany me at all times until I can stand on my own two feet.”

A top Yad L’Achim official said this week that “it is moving each time anew to see people of all ages discovering their true identities and seeking to connect to Judaism and embark on entirely new lives. This teaches us that it’s never too late and we must never give up on any Jewish soul, no matter how far it strays.”

Indeed, this is the motto of Yad L’Achim, the theme that underlies all of its rescue, hasbarah and prevention efforts: We don’t give up on any Jew.