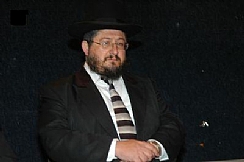 Beersheva’s Chief Rabbi, Harav Yehuda Deri, was stunned by the registered letter that arrived recently at his home. It was a court order forbidding him from approaching Eliezer Malachi, a local resident Harav Deri knew only too well.

Harav Deri was stunned for two reasons: The order was issued against him, a noted Rav and head of the city’s batei din, with no advance notice and with no opportunity to tell the court his side of the story; and Rav Deri had been sure that Eliezer Malachi, a missionary dressed as a chareidi Jew, had long since left town.

The bizarre story began in the spring of 2005, when Yad L’Achim learned that Malachi, a sofer who had showed up at shul every day, was actually a missionary working on behalf of Messianic Jews.

Yad L’Achim obtained material being distributed in Beersheva that urged local residents to, “Save yourself from the pain of redemption” by believing in “that man”. The material included distorted quotes from the words of Neviim to the effect that Am Yisrael should yearn for that man’s coming. A thorough investigation by Yad L’Achim revealed that the source of the blasphemous material was the sofer.

A special team from Yad L’Achim’s counter-missionary division visited the house, presenting themselves as people wanting to learn how to become sofrim. They saw a copy of the “new testament” on the worktable where the sofer wrote his mezuzos.

At one point, the sofer’s wife became suspicious that the Yad L’Achim team was filming her husband with hidden cameras and began screaming hysterically, pushing them out the door.

The Yad L’Achim team turned to Harav Deri and asked him to issue a ban prohibiting anyone from buying mezuzos or tefillin from the impostor and instructing those who had already bought from him to burn them, in accordance with the halachah of a sefer Torah written by an apostate. Rav Deri asked to meet the man first.

“When he came to my office, I asked him two things,” recalls Rav Deri. “Do you believe in that man, and do you write sifrei Torah, tefillin and mezuzos? He answered me that he definitely believes in that man, and he began citing quotes that he claims supported his dubious beliefs. I stopped him and told him that I wasn’t prepared to hear his words of kefirah, and asked him to answer immediately my second question. The man confirmed that he writes tefillin and mezuzos, and that over the years he had sold many sets to many people. I clarified to him that in the next days I would publicize a clear ban against buying tefillin and mezuzos from him, and would call on those who have already bought from him to burn them or hand the parchments over to the Rabbinate. From that time, I haven’t heard from the man or met him. I was certain that he had disappeared from the city after he was found out.”

Then, last month, Rav Deri received the court order barring him from approaching Malachi. The Rav later learned that Malachi had made up stories about the Rav to the effect that he had sent yeshivah students to beat him up. The man told the court, “The students came to my home and began beating me, even as they were in phone contact with Rav Deri, who ordered them to continue beating me without mercy.”

When word of the court order got out, the religious community in Beersheva was outraged. Would the court have dared to issue such a decree – without benefit of response – against the president of the Beersheba District Court, the Rav’s equivalent in the secular system? The Rav petitioned the court to have the order rescinded.

After several delays a hearing was held, and last week the order was revoked and the missionary was ordered to pay court costs amounting to NIS 1,500.

After the ruling, Harav Deri said, “The missionaries spread a libel about me, after I used all legal means to stop them. In cooperation with the people of Yad L’Achim, a special network of volunteers has been set up that uses every legitimate means to stop missionary activity. This court order was a revenge on the part of the missionaries.”

Rabbi Sholom Dov Lipschitz, head of Yad L’Achim, said last week, “This infuriating event must serve as a red light. We see that missionaries aren’t afraid to use any tool at their disposal. First, they send to the front a person who looks like a religious Jew to act in our midst as a sofer. When he is revealed, they don’t hesitate to spread a libel against the Rav of the city. The time has come for the public to wake up and expel the missionaries from its midst.”