Emotional Ukrainian Refugees: ‘We Fasted on Yom Kippur, Celebrated Sukkos – for the First Time Ever’ 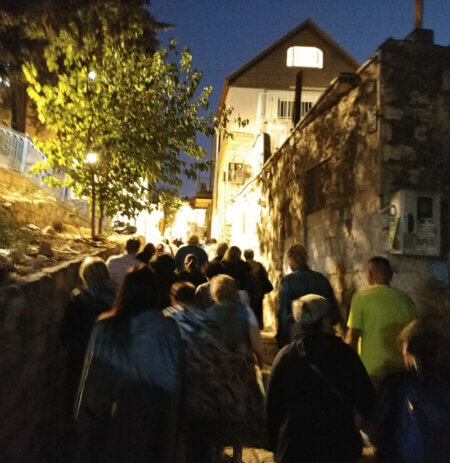 Yad L’Achim’s intensive efforts to protect the Jewish identity of Ukrainian refugees against the onslaught of well-heeled missionaries lying in wait reached their highpoint during the month of Jewish holidays that has just come to an end.

Yad L’Achim rabbis spent the holidays with refugees in seven cities that are absorbing them, organizing special activities designed especially for them. Some of the rabbis moved with their families to these cities to open congregations tailor-made for refugees, protecting them from missionaries who approach them in the guise of offering humanitarian assistance.

In the seven cities – Ashdod, Nof Hagalil, Karmiel, Kiryat Yam, Netanya, Haifa and Ramat Gan – Yad L’Achim conducted minyanim for Rosh Hashana that were followed by invested Yom Tov meals fit for a king for thousands of refugees who have no family to celebrate the holiday with.

Some of the refugees related, with great emotion, that this was the first time they had recited the prayers of the holy day and observed it in accordance with Halacha. They returned for Yom Kippur, when the fasted the entire day and participated in all the tefillos.

Earlier – toward the end of Elul and during the Asseres Yemei Tshuva – “Selichos Tours” were arranged that included visits to shuls in Yerushalayim, Tzfas and the graves of the righteous, together with instruction in how to participate in the special prayers. In addition, Yad L’Achim distributed hundreds of thousands of shekels worth of food coupons and packages filled with basic holiday necessities.

The scope of activities increased dramatically over Sukkos, beginning with the distribution of mehudar sets of arba’as haminim, the hosting of families in sukkos and the attendance at joyous Simchos Beis Hasho’eva, and concluding with chol hamo’ed tours and events for the children.

Harav Gavriel Tzarevski, a Yad ‘Achim activist in Ashdod, put it this way: “On Erev Chag Sukkos we set up a giant, 48-meter sukkah. During the holiday we merited to host more than 200 guests, refugees, and veteran immigrants. Every evening they sat for beautiful Yom Tov meals spliced with divrei Torah and songs and dancing until the early hours of the morning.”