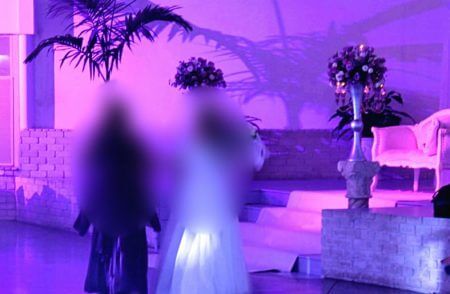 One of the four brides at a wedding this week

Four Jewish women who’ve spent years in Yad L’Achim’s care after suffering at the hands of their Arab husbands are this month taking the joyous step of building Jewish homes.

One of the brides, born to a Jewish mother and an Arab father, was rescued together with her mother when she was five. Since then, she has benefited from Yad L’Achim mentors who helped her find her way as a Jew, in school and in the community.

A second wedding will be held for a young woman who escaped with her baby from a violent Arab husband.

A third involves a woman who was involved in a relationship with a Muslim man for a year. That relationship was severed due to the outbreak of violence in their mixed Arab-Jewish city during IDF Operation Guardian of the Walls in May. The events made her understand that she’d made a mistake and helped her decide to set up a faithful Jewish home.

The fourth is of a young woman who was involved over the years with a number of minority men, but after prolonged treatment by Yad L’Achim returned to her family and people, and is now building a Jewish home of her own.

Suri Kostlowitz, of Yad L’Achim, says that “many hundreds of Jewish women who get caught up in relationships like these are cared for by Yad L’Achim each year and led to safer spiritual shores. But the process of rehabilitation is arduous and can take years.

“These brave women are assigned social workers and psychologists who help them open a new chapter in their lives and overcome the many difficulties that stand in their way – emotional, economic, social, legal and more… It’s a slow process, but gradually they create new identities and are able to stand on their own two feet.

“Each and every story of a brave woman who succeeds in building a Jewish home is a source of profound joy for us. When four ‘survivors’ marry within such a short period that is an extraordinary success.

“In our demanding work, nothing gives us more encouragement than such joyous events. The women in our counter-assimilation department work day and night to give survivors the tools to create healthy relationships, and Baruch Hashem they can point to successes.”