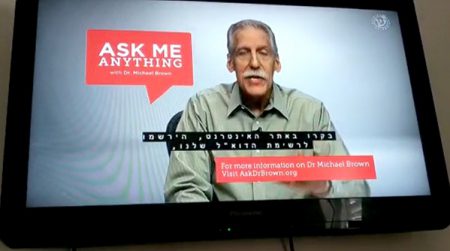 Missionary preaching in Hebrew on the broadcasts that were shut down

After a persistent campaign waged by Yad L’Achim over the past six months, a Christian network has lost its license to broadcast in Israel.
The Communications Ministry announced this week that “the head of the Council for Cable TV and Satellite Broadcasting, Mr. Asher Biton, has informed the Hot Cable channel of his decision to suspend the license for ‘Arutz Shelanu.’ As a result, the programming will be removed from HOT TV within seven days. The channel targets Jews with Christian content, as opposed to its claim, in its initial request for a license, that the programming was aimed at the Christian public.”

The decision marks a huge victory for Yad L’Achim’s behind the scenes efforts with outgoing communications minister David Amsalem and Biton, of the Council for Cable TV and Satellite Broadcasting. Crucial help in these efforts came from the Rishon LeZion, Sephardic Chief Rabbi Yitzchak Yosef, shlita, who wrote a moving appeal to Amsalem, and to MK Rabbi Moshe Gafni (United Torah Judaism), who met personally with the minister to lobby him to cancel the programming.
The story begins a few months ago when Ward Simpson, the president and CEO of “G-d TV,” applied for permission to set up a channel called “Shelanu” to broadcast Christian teachings in Hebrew.

In his request for a license, he claimed that the content of his Christian station was aimed at Christian viewers in Israel. Yad L’Achim revealed that his real intention was to reach out to Jews with Christian teachings in an effort to get them to accept Yeshu. However, the Communication Ministry accepted Simpson’s claim and issued him a license a month and a half ago to begin broadcasting.

Yad L’Achim refused to give up and its research department obtained irrefutable evidence of Simpson’s true intentions. This included films of his proclaiming to supporters that for the first time the missionaries would have direct access to Jews in Israel. He said that the name of the channel, Shelanu, which means “ours,” was meant to say that Yeshu belongs to Jews and Christians alike.
“For the first time in history, a channel spreading the messianic gospel will broadcast. This will reach Jewish viewers and Arabs in Israel, in Hebrew. It will be available to 600,000 Israeli homes with programs in Hebrew, and in English with Hebrew subtitles. This is a breakthrough; the Christian gospel will be broadcast all across Israel in the modern language of the early Jewish prophets.”

The authorities in Israel, upon receiving this new information, summoned the ‘Arutz Shelanu’ operators to an urgent hearing. The Communications Ministry confronted the channel’s operators with the film, charging that the license had been obtained under false pretenses.

In explaining their decision to close the channel, the authorities released the following statement: “Before the decision to close the station, the chairman of the Council for Cable TV and Satellite Broadcasting held a hearing, to which HOT and the channel were given an opportunity to respond.”
According to the statement, the respondents offered no satisfactory explanation for how it deviated from its initial request for a Christian station aimed at Christians and that therefore the authorities had no choice but to remove the broadcasts.

In its application, the station “explicitly stated that the channel was meant for a Christian population. From an investigation by the council’s oversight committee, it is evident that the channel is not aimed at the Christian public in Israel but specifically at Jews.
“The oversight committee found that even after the hearing was convened the channel continued to appeal to Jews in an attempt to teach them the principles of faith of the Christians and Messianic Jews (Jews who accept Yeshu as the messiah) and to convince them of its validity. This is in keeping with the intentions of the president and CEO of the channel, expressed in speeches that were publicized on the channel after receiving the license to go on the air.”

The statement added that had the chairman of the Council for Cable TV and Satellite Broadcasting been aware of the nature of the Christian channel he would have initially required that approval for its license be granted only by a vote of the full council, and not just by the chairman, as was done in this case.
Biton wrote that there has never been a missionary channel broadcasting to “the Jewish people who dwell in Zion,” and that the matter of broadcasting Christian content to Jews is “complex and sensitive.”

“Therefore, whether this was a violation of the rules of fair play, a deliberate attempt to hide the true nature of the broadcasting, or whether the change in direction came after the license request was approved, there is no place to leave the approval of the channel in effect and allow it to broadcast.”
A senior official at Yad L’Achim said in response: “We are pleased that the communications minister, Mr. Yoaz Hendel, and his staff understood the intent of the operators of the channel and acted to close it in accordance with our request. We are also grateful to the Rishon Lezion, Harav Yitzchak Yosef, shlita, and the outgoing communication minister Mr. David Amsalem and the chairman of the Council for Cable TV and Satellite Broadcasting, Mr. Asher Biton, and to MK Rabbi Moshe Gafni for their vital efforts in removing the missionary channel.”

He added that the organization is not resting on its laurels and asks the public to notify it, 24 hours a day, regarding any missionary activity, to the Yad L’Achim hotline at *9234. 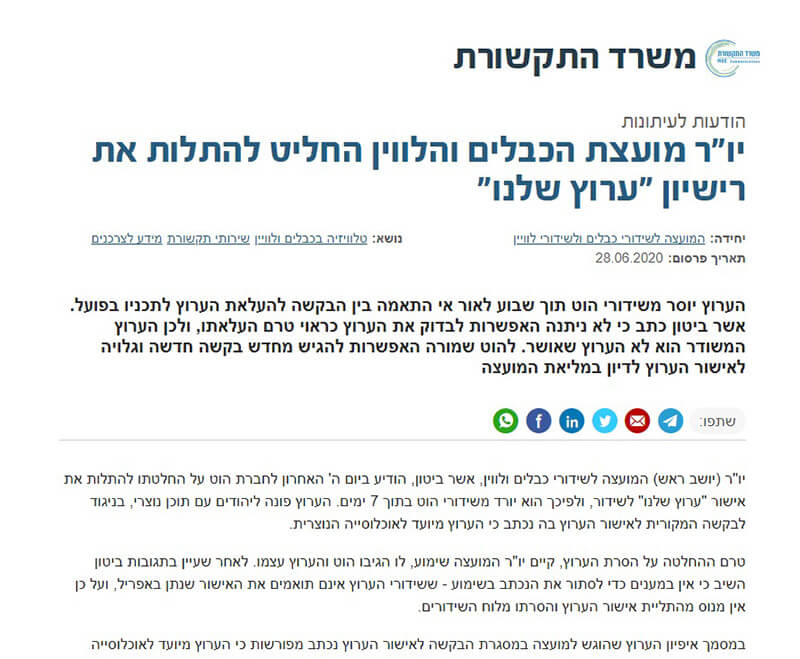 A written copy of the Communication Ministry’s decision