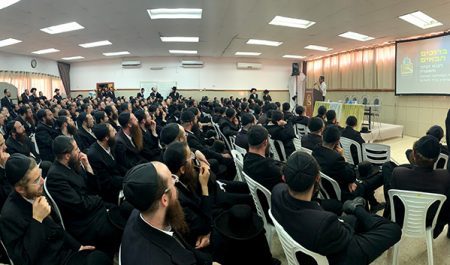 Hundreds of avreichim at the special conference

Some 350 avreichim from the south of the country participated in a “call to action” conference organized by Yad L’Achim’s counter-missionary department.

The conference was the second in a new series that aims to alert the public as to the extensive activities of the missionaries, expose their modus operandi and recruit volunteers in every region.
After the successful conference, held in Yerushalayim two weeks ago, Yad L’Achim received many request from city Rabbis and chareidi communities around the country to hold similar conferences in their regions.

The gathering in Yerushalayim was opened by Rabbi Binyamin Kluger, a former missionary who today serves as a special adviser for Yad L’Achim. He shared his dramatic personal story, accompanied by a special slide presentation, including the instructions he had received from the cult on converting Jews out of their religion. “It is preferable to baptize one Jew over 100 non-Jews,” he recalled being told.

A panel discussion was led by key Yad L’Achim activists in the south who shared their successes in battling the missionary shemad campaign. They urged the crowd to get involved and dedicate some time each week or month to engage in the sacred activities of Yad L’Achim. To demonstrate the positive things that can happen when people get involved, the activists told of a major city in the south that at one time had 15 active missionary outlets – including congregations, a soup kitchen, a center for the elderly and a chess club. Today that city has just one small missionary chapter that is active in a remote industrial zone.

The persistent efforts of Yad L’Achim over the years have paid off.

As if to demonstrate the urgent need for the conference, one participant was shocked to discover that his “pleasant” neighbor, always quick to offer his generous assistance, was a senior missionary. He had no idea that he was being set up, until he saw a picture of his neighbor engaged in missionary preaching in the slide presentation that concluded the event.
The conference, which was organized with the encouragement and blessing of Harav Volkovitch, one of the leading chareidi Rabbanim in the south of the country, closed with a song that was produced by Yad L’Achim activists as a slogan for their activities. The song is a call to action to save Jewish souls and includes the story of the organization’s struggle against missionaries in the south.

At the conclusion of the conference, the MC called on the broader public to contact Yad L’Achim’s emergency hotline to report any encounter with missionaries. At the same time, dozens of participants asked organizers how they could get involved in these activities.

In response to the request of many at the conference, a follow-up will be organized in the region for women. “It is important that they also be familiar with the activities and tactics of the missionaries and be able to reach out to Jewish women who have fallen into the cult,” organizers said.