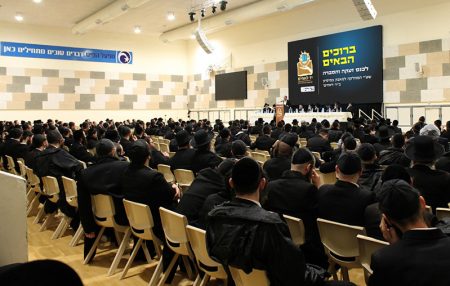 Part of the crowd at Yad L'Achim's missionary conference in Ashdod

The rally was held in response to a Kol Koreh proclamation signed by the city’s admorim and its Chief Rabbis, Hagaon Harav Yosef Sheinin and Hagaon Harav Chaim Pinto, as well as leading Rabbinic figures connected to the Abuhatzeira dynasty.

This was the third in a series of conferences organized by Yad L’Achim to raise awareness among G-d-fearing Jews regarding missionary activities in their midst and to rally them to effectively battle them.
The meeting was opened by the moderator, Hagaon Harav Chaim Deutsch, one of Yad L’Achim’s senior lecturers, who spoke on the obligation of Jews to take responsibility for one another, which includes saving lost souls from the missionaries who lay in wait for them.

Hagaon Harav Chaim Pesach Horowitz, a Dayan of the city’s Belz kehillah, spoke of the intense battle between the forces of holiness and impurity in the city. “The forces of impurity want to nab one Jewish soul and then another and another,” he said. He called on all those present at the conference to enlist in the determined struggle “and to not be overwhelmed by the missionaries’ powers of impurity and the enormous resources they have at their disposal,” reminding them of the saying of our Sages that “he who saves a single Jew it’s as if he has saved the entire world.”

Harav Shmuel Dovid Gross, Rav of the city’s Ger kehillah, began by citing the halachah on the obligation to save a Jew from shemad, even if it means being mechallel Shabbos. Harav Gross noted with pain the mounting activities of missionaries and their success in infiltrating chareidi neighborhoods. At the same time, he praised the vital work of Yad L’Achim in fighting these dangers. “If we act with determination, we will succeed,” he said, pointing out examples of other cities that had succeeded in eradicating the problem of missionaries. 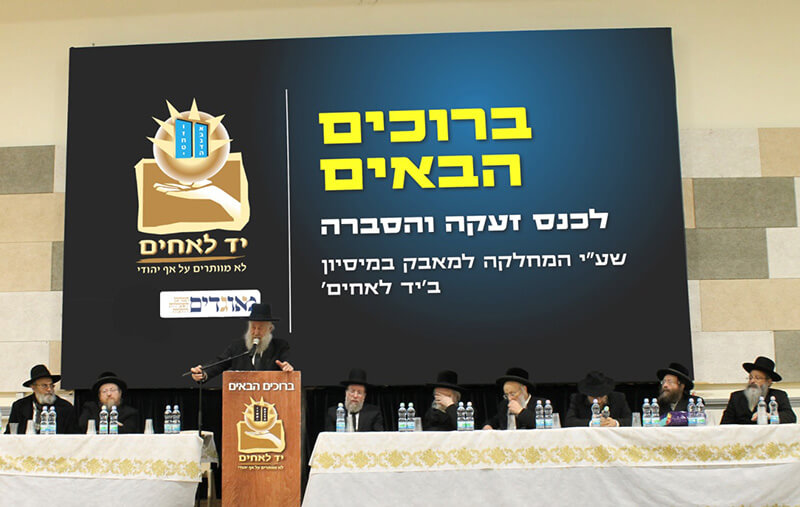 The Chief Rabbi of Ashdod, Harav Sheinin, addresses the conference

The Chief Rabbi of the city, Harav Sheinin, delivered a fiery address on the importance of the moment and the fateful responsibility that rests on the shoulders of all G-d-fearing Jews to join the battle. He spoke with reverence about Yad L’Achim’s legendary founder, Hagaon Harav Shalom Dov Lifschitz, zt”l, and shared stories of their days together.

“He was an unbelievable masmid and still found time to be active and inspire others to be active,” he said, sharing memories from the heroic struggles in which he himself took part. In one incident, in 1961, he merited to sanctify the name of Heaven by breaking into a fortified missionary building and getting arrested by the police.

The Rav stunned his listeners with his description of the chutzpah of missionaries in sending him an envelope containing a missionary book. “If such a book reaches innocent hands, those who don’t know how to discern the danger, it’s impossible to assess how much damage it can cause,” he said. “We must not remain quiet.”

He concluded his words with a clarion call for each and every person at the meeting to take party in the activities of Yad L’Achim. “We can’t stand by in the face of the missionaries’ shemad activities in our city,” he said.
Also participating in the assembly was Deputy Mayor Rabbi Yechiel Weingarten who was applauded for his activities on behalf of the purity of the city in general and in particular against the missionaries. The moderator, Rabb Deutsch, warmly blessed him and his activities on behalf of the public.

A hush descended on the crowd when the Admor of Melitz approached the podium. He said that in these days, after the Siyumei HaShas that were held all around the world, you could feel a boost in kedushah that makes it possible to defeat impurity. “No soul should be left behind. We must not give up on any Jew,” he said, even one who has been ensnared in the trap of the missionaries. We must do everything to help him reveal his Jewish core.”

The chairman of Yad L’Achim, Harav Yisrael Lifschitz, stressed that the missionaries can spot the vulnerable among us and proceed to target them. They are on the look-out for isolated Jews who are experiencing difficulties of one kind or another. “If we are wise enough to reach to these Jews before the missionaries, we can save them,” he said.

The crowd was captivated by the lecture of Rabbi Binyamin Kluger, a former missionary who today serves as a special adviser to Yad L’Achim. He shared an unvarnished look at the activities of the missionaries and their devious ways. His talk, supplemented by slides, riveted the crowd with rare testimony on the instructions he had received from the cult to get Jews to convert. He was explicitly told: “It is preferable to baptize one Jew than 100 non-Jews.”

Closing the speeches for the evening was the field coordinator of Yad L’Achim, Rabbi Shimon Abergil, who detailed the burgeoning activities of the missionaries in Ashdod and their modus operandi. Rabbi Abergil demonstrated the ease with which it is possible to stymie the missionaries via exposure, locating their points of operation and protecting Jews in the area via information programs, and called on everyone to join in these preventive activities.

Yad L’Achim wrapped up the successful meeting by observing that as busy as its activists were, they needed the help and initiative of local residents to mitigate missionary activity in Ashdod, as has been in the case in other cities.