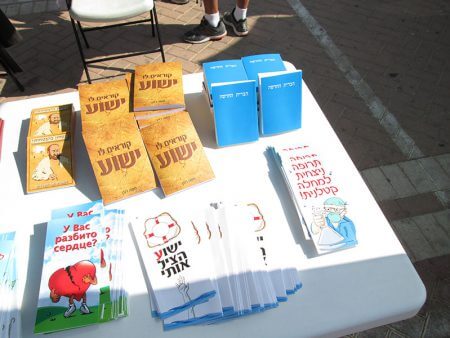 Thanks to the efforts of MK Rabbi Moshe Gafni (United Torah Judaism) and Rabbi Yinon Azulai (Shas), the Knesset Finance Committee temporarily rejected an appeal by the J’s Witnesses cult to receive tax-exempt status. A permanent decision is expected shortly.

The committee reached its decision after being presented with clear evidence that the cult preached to minors, in violation of the law.
During the proceedings, in an affront to decency, representatives of the Justice Ministry and the Tax Authority argued on behalf of granting the missionaries tax-exempt status, on the grounds that they had agreed to stop preaching to minors.

Rabbi Gafni fired back at the government representatives that just because the missionaries had stopped their illegal activity – preaching to minors is a violation of Clause 368a in the criminal code – was no reason to reward them with tax benefits. “It is like saying we should acquit a thief at his trial because he promised to stop stealing, when he is still deserving to be punished for the crimes he already violated,” he said.
Rabbi Azulai said that despite the claim of the missionaries that they had removed some of their advertisements aimed at minors, he had in his possession new materials clearly showing that nothing had changed and that they were continuing to target youngsters.

Yad L’Achim, which has been monitoring the case and been providing the committee with definitive proof of the missionaries’ activities, expressed hope that the High Court would not overturn the decision of the Knesset panel, as it did half a year ago.

At that time, Rabbi Gafni, as head of the Knesset Finance Committee, managed to convince all of its members, including those belonging to Yesh Atid, Yisrael Beytenu and the Arab parties, to deny the missionaries other types of tax benefits, but the High Court scandalously overturned the decision.

Yad L’Achim praised the MKs on the committee for standing firm on behalf of Kodshei Yisrael, adding, “It is inconceivable that missionaries who act to convert Jews out of their religion should receive tax benefits worth millions of shekels at the expense of the taxpayer.”