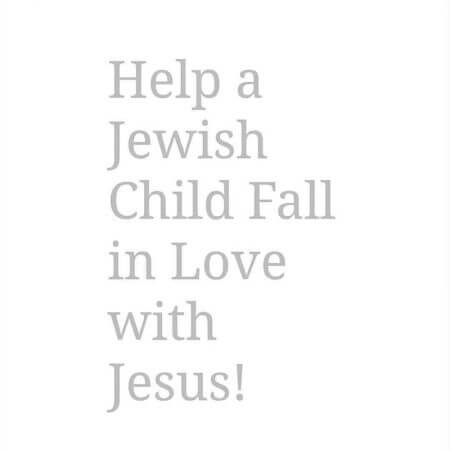 Missionary appeal: "Please, give a generous donation today to change young lives this summer and beyond."

Bearing the horrifying headline “Help a Jewish child fall in love with J,” an email was sent last week by the largest missionary organization in Israel to Christian donors around the world, asking them to participate in preaching to Jewish children to get them to convert to Christianity.
The email opens with statistics showing that most followers of J. “came to know him” at a very young age; 43% before the age of 12.

“This type of data has been confirmed time and again,” the authors of the email say. “Researchers describe childhood as a life stage when people are most open to the gospel… the implication is clear: If you want to win over a group to J, focus on children.”

The missionaries quickly get to the point, asking Christians around the world to help in their shmad work. “Please, give a generous donation today to change young lives this summer and beyond.”

A Jewish missionary who is making her way back to Judaism with the help of Yad L’Achim received the email and brought it to the immediate attention of the counter-missionary organization.

The following sentence from the email is chilling: “Our children and youth ministers are passionate about what they do…”

The email serves as a confession by the missionaries that they target children in their campaign to win over converts to Christianity, say Yad L’Achim officials, adding that they are preparing to file suit via attorney Guy Ophir.

At the same time, Yad L’Achim is asking parents them to keep an eye open on their children and, in case of need, to turn to the organization’s 24 hour hotline. Discretion is guaranteed.
The months of summer and vacation bring with them a range of new dangers for children, including Christian missionaries, warns Yad L’Achim. Missionaries in Israel, with the help of funding from churches and Christian believers around the world, are investing many millions of shekels a year in their internet operations.
In recent years we’ve seen a drop in the number of preaching campaigns on the streets, while missionary activity over the internet has skyrocketed by more than 200 percent.
Missionaries prefer to preach over the internet because it allows them to reach many more people with greater ease, especially children and youth – unbeknownst to parents and relatives.
The missionaries know how to lure children with enticing headlines and films, which they use to spread lies and deceit.
Legally, preaching to children is a violation of the criminal code (clause 368a) that carries jail time. However, the police have never arrested violators, signaling the missionaries to continue.