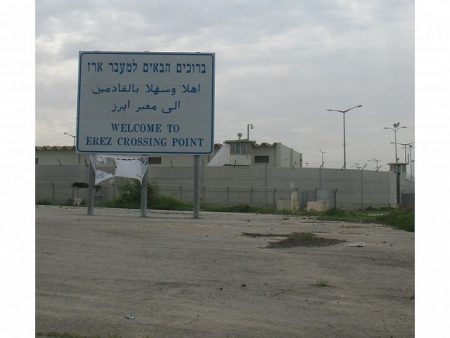 Ochana, a 29-year-old Jewish Israeli who grew up in Ashdod, married a Muslim man seven years ago and then moved to Gaza with him.

Speaking to The Jerusalem Post just hours after her escape while on her way to her family’s home in Ashdod to celebrate, she said she had reached the decision months ago to get away from her husband, Abdallah, who ekes out a living smuggling goods through the elaborate system of tunnels connecting Rafah with Egypt.

“That was no life for me and the children,” she said. “The children had dreams that I wanted to make true. And we couldn’t as long we remained in Gaza.
“Now I am trying to forget everything.”
Ochana and her four children – Mahmoud, seven; Abdel Rahman, five; Sali, six; and Asma, not yet two – left the apartment they shared with her husband’s family on Tuesday morning. She told her brother-in-law that she was accompanying her sister-in-law to school and was going to buy a few things for the kids before returning to the small apartment.

But she had other plans.
Ochana’s family in Ashdod had already contacted Yad L’Achim, a haredi anti-missionary organization that also helps Jewish Israeli women extricate themselves from marriages with Israeli Arabs and Palestinians.

The Ochana family told the haredi organization about Ochana’s predicament and Yad L’Achim went into action.

“At first, security officials were suspicious. They were concerned that she might be a spy or a suicide bomber,” Lipshitz said.

A decision was made that Ochana would make her way to the Erez crossing between the Gaza Strip and Israel, where Israeli military officials would be notified and she would be let through. Yad L’Achim promised to find a hideout for Ochana and her children and to help them financially.

But making it to Erez, on the extreme northern side of the Gaza Strip, from Rafah, located about 60 kilometers away on the extreme southern side, was not easy. Suspicious that she might try to escape, Ochana’s in-laws were carefully watching her.

As she stood in downtown Rafah, her brother-in-law’s threat that he would kill her if she tried to run away still rang in her ears. Still, she waved down a taxi. She knew she had to take the chance.

Ochana piled her children inside and ordered the driver to take her to the Erez crossing.

The driver was suspicious of a woman wearing a hijab and speaking Arabic with a Hebrew accent who wanted to cut across the Gaza Strip to reach Erez.

“I told him that my father was very sick and I needed to visit him as quickly as possible.”

She managed to pass through the Hamas-controlled side of the Erez crossing. On the Israeli side, the commanding officer had been notified that Ochana would be arriving.

Israeli security officials began questioning Ochana. But when one of her children passed out due to the excitement and dehydration, the interrogation was cut short and the Ochanas were rushed to Barzilai Medical Center in Ashkelon.

On Tuesday evening, Ochana celebrated her new-found freedom with her family in Ashdod. She plans to change the names of her children to Hebrew names.
Yad L’Achim’s Lipshitz, who has helped other women escape from marriages with Arabs, said there were “hundreds” of Israeli women in similar situations.
“Some are in Gaza, others are in Nablus or Tulkarm, and there are some in neighboring Arab countries,” he said.

“We are not a racist organization. But we do not want to lose Jewish souls. We lost enough in the Holocaust,” he said.

Ochana warned other women not to make the mistake she made.

“It was stupid,” she said. “I had a friend who introduced me to Abdallah. We had fun together. We danced and drank – I got carried away. I was his lapdog.”

Ochana said she would not miss Abdallah.
“I am still young enough to start my life over again.”