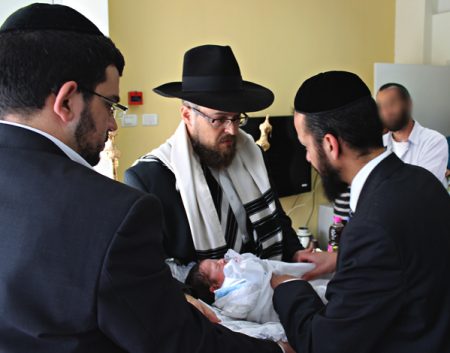 It was a race against the clock. At stake was the fate of a Jewish mother, her baby son, born on Simchas Torah, and her one-year-old toddler.

Yad L’Achim had known of the woman’s suffering at the hands of her Arab husband in southern Israel. It was clear that if she left the hospital and returned home with him, she and her children would end up back in captivity, with limited opportunities of rescue.

Yad L’Achim’s counter-assimilation department went to work on a plan to rescue her, taking into the account the delicate situation and the limited window of opportunity.

Two days after the birth, when mother and baby were due to be released, a Yad L’Achim team arrived at the hospital to guide her through the rescue. As the paperwork on their release was being processed, the young mother told her husband to wait in her room while she went to the nursery to check on the baby. While the husband remained in the room to pack up, she and the baby were smuggled out of the hospital through a back door into a waiting Yad L’Achim car.

By the time the husband suspected that something was wrong, it was too late. He approached the nursery, only to be told that his wife and baby had long since been released.

Accompanying the mother and her newborn in the getaway car was a Yad L’Achim social worker. Their first stop was a day care center, where they picked up her one-year old son before speeding off to a “safe house” in the north of the country.

The home, fully furnished by Yad L’Achim and stocked with all the basic necessities, including food, clothing, toys and vital medicines, gave the young family a chance to set roots and start life anew.

Less than a week later, when the baby was eight days old, he was entered into the covenant of Avraham Avinu. The mohel, Rabbi Shimon Dor, the head of an institute that trains mohalim, expressed his thanks for meriting to perform the mitzvah in such special circumstances. The sandak was Yad L’Achim’s chairman, Rabbi Yisrael Lifschitz.

At the start of the ceremony, participants broke out into spontaneous singing: “Let this hour be an hour of mercy!” There wasn’t a dry eye in the house when the mohel called out “Shema Yisrael” – the Jewish people’s hallowed pledge of allegiance to the A-mighty – recognizing all that had been done to bring this young child back to his people.

The mother then recited the blessing of shehecheyanu and of hagomel, traditionally recited following rescue from captivity. Her words reverberated with emotion and sincerity, offering praise to G-d for the wondrous miracles involved in delivering her from distress and servitude.

Yad L’Achim officials noted this week that it was heartwarming to begin the new year with the rescue of three Jewish souls.