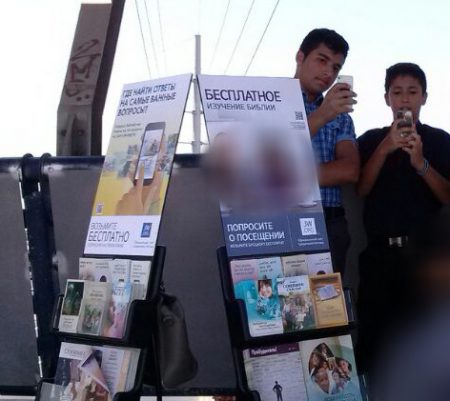 The missionaries in action. A missionary booth for the J's Witnesses

A week before Pesach, Yad L’Achim warned that Israel was on the brink of a major missionary campaign run by J’s Witnesses, which had recruited Christian groups from around the world to provide additional manpower. The warning was based on sources from within cults.

Within a matter of days, residents of cities around Israel were being accosted by missionaries knocking on their door and trying to gain entrance to their homes to “enlighten” then with Christian teachings.
Other missionaries took up positions downtown in areas teaming with people, where they handed out copies of the “new testament” to passersby. Yad L’Achim was out in force to counter the missionaries, warning passersby not to be taken in by the books and pamphlets these friendly looking people were distributing for free.

In a special announcement to the general public, Yad L’Achim revealed that “the missionary cult J’s Witnesses has begun a massive campaign to spread its message and convince Jews to convert out of their religion, via many dozens of missionaries from abroad who arrived especially to participate in the campaign.”

The announcement added that “Yad L’Achim is acting against the missionaries and to rehabilitate those who have been harmed by the cults, and is warning the public: This is a cult that is ranked among the most dangerous in many intelligence reports in western countries and its activities are banned in many countries. The cult hides its true face in order to confuse the public.”

It should be noted that in the past week the Supreme Court in Russia ruled that the cult’s activities are illegal on the grounds that it “destroys families and breeds hatred.”

Yad L’Achim continues to preempt the missionaries and do everything in their power, within the dictates of the law, to alert the local population as to the danger.

Yad L’Achim’s legal department expressed outrage at the absurdity of the situation. The missionaries brazenly lied to border officials when they entered Israel, saying they were coming as tourists when there real goal was to convert Jews out of their religion. “Instead of the police arresting them and deporting them, they evict Yad L’Achim,” said one lawyer.

At the same time, Yad L’Achim singled out for praise the response of the public, which has been calling the organization’s hotline at all hours of the day and night to notify it of the exact location of missionaries. This cooperation has ensured that Yad L’Achim is able to arrive at each site and foil the cults.

Yad L’Achim’s counter-missionary department stresses that the campaign is still at its height and the public is asked to continue reporting to the emergency hotline, at *9234, which is manned 24 hours a day.