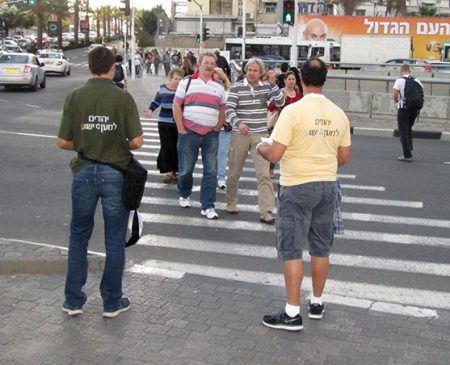 Members of the “Messianic Jews” cult were dealt a double blow recently when they manned the busy Tel Aviv intersection of Derech Menachem Begin and Sderot Kaplan, on the approach to the Azrielei Center, and distributed poisonous missionary material.

Alert citizens seeking to put a halt to this dangerous activity had contacted the Yad L’Achim hotline. Within minutes, a team headed by Binyamin Vulcan arrived, explaining to passersby that the “friendly” faces distributing pamphlets were actually missionaries.

When the cult members realized that the presence of Yad L’Achim activists at the scene had foiled their plan, they called the police and sought to file a complaint. The police arrived and heard testimonies as to what had happened.

To the surprise and disappointment of the missionaries, the police stated that in a democratic country there is no problem with Yad L’Achim’s activities. Furthermore, they asked that, in the future, the missionaries not trouble them with bogus complaints.