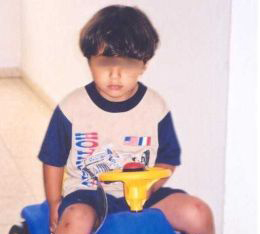 When Rachel first met Ami she didn’t know he was an Arab. She had been hitchhiking in Jerusalem and he pulled up in a nice, new car and offered her a ride and lots of attention.

“He was so charming, so nice,” she recalls, in an interview at Yad L’Achim’s Jerualem offices. “I later heard him speak Arabic, but by then I didn’t care.”

Rachel was 17 and confused when Ami breezed into her life. Her father died when she was four, but she was raised in a religious home – her mother covered her hair and her brothers attended yeshiva – and attended religious schools until dropping out in 12th grade. She had a fierce teenaged rebellion and the more she pulled away from her family’s values, the more they pulled away from her. Like most of the thousands of Jewish girls who are involved with Arab men, Rachel was searching in dangerous places for the warmth she couldn’t find at home.

The relationship lasted for two years and they had a son. Ami showered her with gifts and promised to convert to Judaism if only she would marry him and move into his home in Jerusalem. She refused and he threatened to harm the child. She stuck to her guns and he relented.

But the story doesn’t end there. She was still hanging out with other girls who dated Arabs and one of them suggested that they take a trip to the Old City of Jerusalem for fun. That’s where she met Achmed. “He was kind and wonderful at the start, but then turned violent and threatening. He was jealous and would beat me if I looked at anyone. If I said I wanted to meet and marry a Jew he beat me.”

On a number of occasions, the doctors at the emergency room reported her suspicious bruises, and the police turned up to question her. Achmed threatened to kill her if she told the truth about the bruises and so she explained them away as the results of clumsiness and bad falls.

They too had a child together, a son, and he insisted on marriage. She refused. He would sleep outside her house and would forbid her to go out. When she wanted to break it off, he threatened to run their child over. He also threatened to humiliate her by confronting her in public places and making it clear to her friends and employers that she was involved with an Arab.

She stood her ground and, after eight years, broke it off. The problem was what to do with the second child. She had succeeded in patching things up with her family, which even accepted her first child. But they didn’t know about the second one and Rachel feared they wouldn’t be able to accept it and she’s be out on the street again.

The boy’s father put him with a Christian Arab couple in a village near Jerusalem and the child was sent to a missionary school and being educated as a Christian. That’s when Yad L’Achim got involved.

“Someone tipped us off that a Jewish child was studying in this particular missionary school and we were brought into the picture,” says a Yad L’Achim official who works in the Jerusalem office on problems with missionaries and mixed marriages and asked not to be identified. “We’re in the middle of dealing with the problem. Our goal is to make sure he grows up as a Jew and has a good life.”

How does Yad L’Achim extract a Jewish child from an Arab home in an Arab village attending a missionary school? Complicating matters is that Rachel cannot take the child herself due to her family situation. So even if Yad L’Achim gets him out, it still has to find him a home.

Tsipora Gutman, the official in charge of Jewish-Arab marriages in Yad L’Achim headquarters in Bnei Brak, is hesitant to answer. “Just write that we’re at a very delicate stage, but that everything we do gets the approval of our legal department,” she says

Rachel’s case, tragic as it is, is relatively easy. She never moved into an Arab village. Many Jewish girls have converted to Islam, married and are living in villages all over Israel. “It’s always the same story,” says Gutman. “The girl doesn’t get any warmth at home, and the Arab boy knows how to treat her – in the beginning. They marry and then she is treated like his property. By the time she discovers that the charming life he promised is a lie, it’s too late. She’s trapped.

“We get hundreds of calls a year – it’s a plague. And it really shouldn’t come as a surprise. Kafr Kassem is close to Rosh Ha’ayin, Jaffa to Bat Yam, not to mention the cities like Jerusalem, Tel Aviv and Haifa where Jews and Arabs live very near one another.”

Yad L’Achim’s role includes locating such women, reaching them in the Arab villages, helping them get away and helping them build new lives. The network of Yad L’Achim field workers includes social workers who sometimes have to go undercover to reach women in distress, family counselors and legal experts.

But these life-saving efforts are expensive. “I go to Rav Sholom Dov Lipschitz [Yad L’Achim’s founding president] and ask him for $4,000 to cover the cost of flying a child to another country and getting him counseling. He somehow finds it, but it’s always difficult.

“People have to understand that, sad as it is to say, money is the only thing keeping us from saving generations of Jews.”

Rav Lipschitz, who founded Yad L’Achim 50 years ago and is still the force behind the nation-wide operation, blames the problem on poor Jewish education. “Children don’t know what it means to be a Jew. So they don’t feel a need to reject missionaries or to stay away from Beduin men in the army.

“People must understand that Jewish-Arab marriages are part of the larger Israeli-Arab conflict. These girls are in distress, they are wandering the streets and the Arabs take advantage of them. They see it as their goal to marry them and ensure that their childen aren’t raised as Jews. This is their revenge against the Jewish people. They feel that if they can’t defeat us in war, they can wipe us out this way. We must fight this threat as well; it’s a matter of national security.”

Shimmy colors as his mother, Rachel, quietly tells her story. A confident boy of eight, he has no problem talking to strangers. When someone in the Yad L’Achim office offers him a candy bar, he immediately asks for a kippa so that he can make a blessing. “He always does that,” says his mother, smiling for the first time. “He goes to a religious school.”