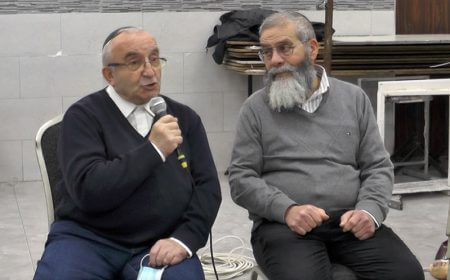 Wechsler tells his story to Yad L’Achim staffers and volunteers

Nearly 100 Yad L’Achim staffers and volunteers attended a riveting lecture delivered by a former priest, Yaakov Wechsler, who shared his life story and encouraged them to continue their efforts on behalf of Jews like him who somehow ended up in Christianity.

Yaakov’s story begins 79 years ago in the ghetto of Svencionys, Lithuania, some 70 kilometers north of Vilna. He was just a few months old when, at the height of World War II, his mother handed  him over to a Christian family for safe keeping. A short while later, both his parents were sent to the gas chambers, Hy”d.

At the age of 35, when he was a priest and one of the heads of the church in Lublin, Poland, his adoptive mother revealed to him the truth about his past, that had been born a Jew and his parents had been murdered in the Holocaust.

Thirty years later, Yaakov decided to leave Poland and move to Israel. At first, he continued to adhere to Christianity, but with time he began to believe in the G-d of Israel, and even to keep mitzvos. Yad L’Achim has been accompanying him on his journey in recent years.

It invited Yaakov to lecture on his life to a convention held for field workers in the organization’s counter-missionary department. The lecture was also attended by 30 women from the counter-assimilation department.

For two hours, Yaakov told his fascinating story – of the teasing and taunting he endured in his Polish school because he was suspected of being a Jew, of his Catholic education, of his priestly studies and his shock at learning he had been born a Jew.

In a voice choked with emotion, Yaakov spoke of his decision to abandon his work as a priest and  come to the Holy Land, of his identity crisis after making aliya, and of his decision in recent years to return to the religion of his fathers.

For Yaakov’s listeners, the lecture crystallized Yad L’Achim’s sacred and eternal motto: We don’t give up on even a single Jew.

“Our workers, who find themselves in unusual situations facing difficult cases of Jews who appear to be lost forever to the Jewish people, saw yet another example of the strength of a Jewish soul and to what extent it is forbidden to given up on any Jew,” said a Yad L’Achim official. “For us it is clear that every Jew will ultimately return home.”

At the end of his lecture, Yaakov warmly blessed the staffers and volunteers. “I was happy to meet you,” he said with great emotion. “Even more, I was happy to hear that there is an organization that battles for Jews who are in the impossible situation I was in, that ensures that they do not have to make the journey back on their own. I am happy that there is an organization that will help them return home for the sake of their soul.”