Sephardic Chief Rabbi to Yad L’Achim: Shocking to See That Thousands of Jewish Girls Have Gotten Involved with Non-Jews 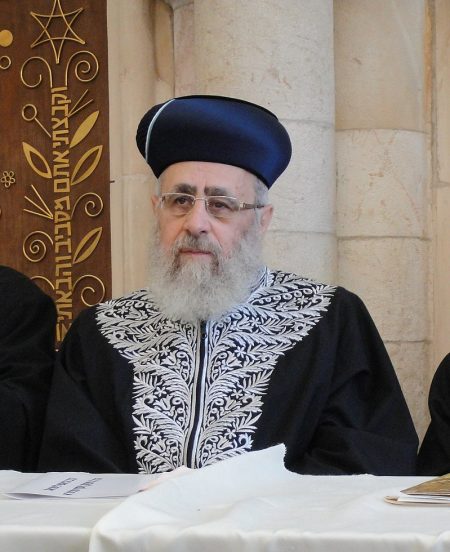 At the opening of the meeting, held in the offices of the Chief Rabbinate in Jerusalem, Harav Yosef stressed the great love that his father, Hagaon Harav Ovadia Yosef, zt”l, always had for Yad L’Achim and its founder and long-time chairman Harav Shalom Dov Lifschitz, zt”l. He added that this affection and high regard derived from Yad L’Achim’s unique role in saving souls, through its counter-missionary department and its education department that guides Jewish children to Torah schools and helps them succeed.

He encouraged Yad L’Achim leaders to continue their efforts on behalf of Jewish children born to non-Jewish fathers, quoting his father, zt”l, that despite the difficulties in such efforts, there is an obligation to draw closer children with non-Jewish fathers, for they are Jews.

After responding to the weighty questions of Yad L’Achim’s leaders, Harav Yosef was shown several of the organization’s daily logs, detailing thousands of cases that were dealt with in recent years by the counter-assimilation department. After taking a longtime to carefully examine the pages of the logs, Harav Yosef said in an emotion-choked voice: “It is shocking to see how thousands of Jewish girls have gotten involved with non-Jewish men in such a short period of time.”

During the meeting, the Rav surprised the heads of Yad L’Achim by revealing that “in my youth I volunteered for the holy activities of Yad L’Achim and merited to save Jewish souls.”

He concluded by saying that he will remain attentive to the needs of Yad L’Achim and offer assistance in every case of pidyon shuvyim and the saving of souls that comes before him.