Main > Articles > Shocking News in France at the First Jew Killed in the Service of ISIS.

Shocking News in France at the First Jew Killed in the Service of ISIS. 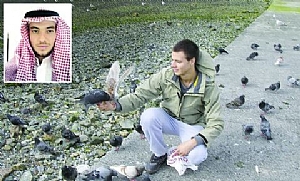 On the 10th of October 2014, the French Intelligence Services reported that tens of young French women left France for Syria to join the ISIS, among them one Jewish adolescent girl.
According to Online 2 News, the Jewish young woman reported is far from the only one.

“It’s the talk of the day among the Jewish French population. It’s forbidden to float rumors about, and we don’t have concrete evidence.” Says Meyer Habib, member of the National Assembly of France, in an interview to Online News 2. “The Interior Ministry is trying to locate all these French women and their families, including the young Jewish woman. I can’t grasp why a Jewess would join the ISIS. Perhaps she is half Moslem.”

Habib says that he is in touch with the Interior Ministry on this subject, and has not received official facts on the subject. “However,” he says, “if there is a Jewish woman who joined the ISIS, that is really beyond comprehension, and that makes the picture much more complex and complicated.”

A month ago, Gideon Kutz, Israeli reporter from France, posted info on the website of Ma’ariv in France, confirming that Rafael Amar (22) is the first victim of Jewish origins who served with the ISIS in Syria. Amar, who was considered a promising computer programmer, converted to Islam four years ago, and came to Syria from France four months ago. Every day he called his parents, who were in opposition to his trip to Syria.

Last month, after he hadn’t called them for several days, his parents received notice of his death (17th Oct., ’14). His father – Lauren, computer engineer, and his mother, Lillian, child psychologist, live in Lunel, in Southern France. They received the harsh news via Islamic contact people, who told them that Rafael was killed with two others in a bomb attack of the Syrian army in Drzor, which is under the reign of the ISIS.

The contacts told Rafael’s parents that he was buried in Syria, and that it wouldn’t be possible to bring his body to burial in France. A number of versions were given regarding Rafael’s death – according to one, he wasn’t a fighter, however he was sent to stop the Syrian’ army’s attack, and was killed by a bomb. Another version has it that his officers decided to sacrifice him after he requested to serve outside Syrian borders, in deference to his parent’s wishes.

Rafael converted to Islam, after what his father described as a “bad meeting” with a friend from his youth who turned into a criminal, and went to Syria. “I am not close to religion. But when Rafael was young, he joined Pesach Seders, and Bar Mitzva celebrations.” he relayed. Rafael’s mother, Lillian, was in advanced stages of conversion to Judaism, when she decided to change her direction in order to help her son and understand him better, and she started finding out about Islam. She only converted to Islam outwardly, according to her son’s wishes.

In Amar’s facbook page, there are links to websites about recruiting people to the Islam, and explaining about “Illumination” and conversion to Islam. Also on his facebook, are video games, and links to technical professional sites, and well as correspondence with his family in Israel, and about a Bar Mitzvah he attended. Amar has many relatives in Israel. Some heard what happened, and some were told that he died in a traffic accident.

“The events in Gaza were a point of contention at home. They used all sorts of anti-Israeli propaganda on him, charging Israel with acts of barbarism. I think that it didn’t affect him, and he realized that Israel was acting in self-defense.”

“Rafael was considered a brilliant computer person, and was about to commence his fifth and final year, for his degree as a computer engineer in the university of Montpellier. However he and his friends were swept away ISIS propaganda and were filled with strange excitement. He cried like a child, and sounded drugged. We had a very difficult argument…” said his father.

Amar travelled to Syria last June, via Spain and Turkey. He wasn’t trained for combat, though he was given an Arab name, and was assigned computer tasks. For example, he prepared a population census of the local terrorist organizations. He also fixed mini-craft made in Iran, which are controlled by telephone. He also helped to distribute leaflets and propaganda among the inhabitants.
“Conversion to Islam among Jews, and especially among women, has become a spreading phenomenon.” Says Sammy Ghozlan, a former policeman, and the president of the French Council against anti-Semitism (BNVCA).

According to Ghozlan, in the Lyon district alone, tens of cases have been reported of young Jewish women who have converted to Islam because of relationships with Arab men, and then they were drawn into extreme Islam. Many of them like Rafael, come from the middle-class. In a testimonial book that has recently been published by parents, there is a testimony regarding a Jewish high-school girl who converted to Islam, and planned to place a bomb in her parents’ store on Avenue des Champs-Elysées. Nevertheless, police sources have reported that at the moment there is no information regarding Jews who are on the verge of departing to Syria.