The Lecture That Saved a Jewish Girl

Among the hundreds of women who crowded into the community center in Har Nof earlier this month to attend a program on “Ahmed ben Sara – The Whole Story,” was a young woman who seemed out of place in a religious neighborhood in Jerusalem.

She sat in the back and listened intently to the different speakers, especially to the 22-year-old woman who had been rescued from an Arab village, leaving behind two children.

Ahmed ben Sara has come to symbolize the growing problem of Jewish women marrying Arab men and moving to Arab villages. Yad L’Achim, the countermissionary organization that in recent years has taken the lead in rescuing Jewish girls from Arab villages, had put together the evening in Har Nof to shed light on the problem.

A few hours before the program was to begin, S. called Yad L’Achim’s hotline. She had gotten involved with an Arab who worked in a chareidi supermarket near her home. Could she attend the program?

Of course, came the response. It was tailor-made for her.

When she arrived at the community center, a Yad L’Achim volunteer who had been alerted welcomed her and sat at her side. S. revealed to the volunteer that she had told her Arab friend of her desire to attend the program and that his initial reaction was to forbid her to go. Then he relented, but until if she promised to leave by10 p.m.

As her “curfew” approached, she grew visibly anxious and frightened. She whispered to her new friend from Yad L’Achim that she had to leave because she was sure that the Arab was waiting outside in his car. The volunteer tried to convince her to stay a little longer, but S was in a panic. “If I don’t leave immediately, he’s liable to come in here and get violent,” she said.

S. slipped out of the community center and entered a waiting car. She heardenough about what can happen in marriages to Arabs to decide to put an end to the relationship. He refused to accept her decision and drove her to an isolated location where he beat her severely. At midnight, he dropped her off near her mother’s home. Three hours later, she was on the phone to Yad L’Achim hotline.

In a panic, she described the view from her window: her Arab boyfriend was in his car, and his friends were in their cars to patrol the area and make sure she didn’t get away. She was frightened and didn’t know what to do.

Yad L’Achim advised her to call the Arab and tell him that she had changed her mind and decided to stay with him. Within half an hour the cars were gone. At daybreak, a Yad L’Achim team showed up at her home and whisked her to a “safe” apartment in the Shomron.

S. refused to heed the advice of Yad L’Achim that she give up her cell phone and cut off all contact with the Arab. Instead, she continued answering his calls and talking to a girlfriend she trusted enough to reveal the location of her hiding place. The girlfriend passed the information on to the Arab and that night three Arab cars pulled up to S.’s new residence. At one point, neighbors called the Kedumim police who questioned the girl and the Arabs. The frightened girl told the police that she was leaving with the Arab of her own free will, and got into his car.

The Arab drove her to a spot near his home and invited her to take a walk with him. “He took me to a side ally and beat me mercilessly,” she told Army Radio in an interview last Monday.

Late that night, he drove her to her mother’s home, warning her not to make any further efforts to end their relationship. With the last ounce of her strength, S. asked her mother to call the Yad L’Achim hotline. “They probably won’t want to hear from me after I brought this on myself,” she said. “But beg them for me.”

A short while later, S. was in a Yad L’Achim rescue car that was taking her to another secure, hiding place. This time she didn’t have to be asked: she handed over her cell phone and cut off all contact.

“For the near future, I’ll remain in this Yad L’Achim safe house until I rehabilitate myself and can return to a normal life,” S. told Army Radio.

Harav Shalom Dov Lifschitz, chairman of Yad L’Achim, said that the organization’s lawyers were making every effort to get the police to arrest the violent Arab and lock him away behind bars. “This startling development should set off a red light among Jewish employers that they must heed the call of the leading rabbis regarding Arab employees,” he said. “Failing to set guidelines of proper behavior and enforce them is a matter of life and death.” 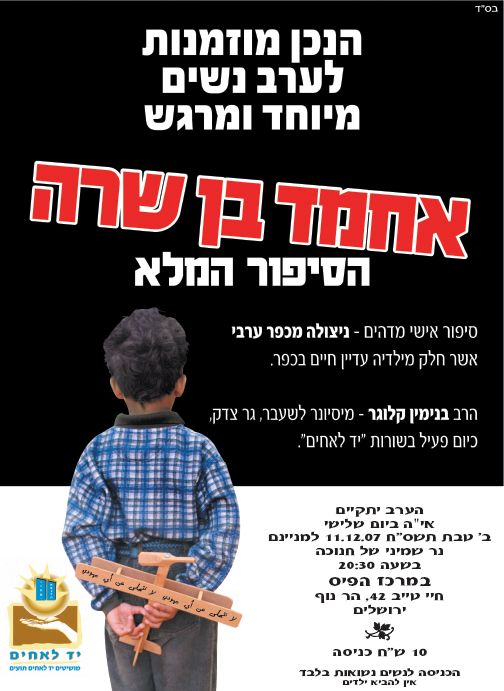