The Most Emotional Rescue of Our Lives 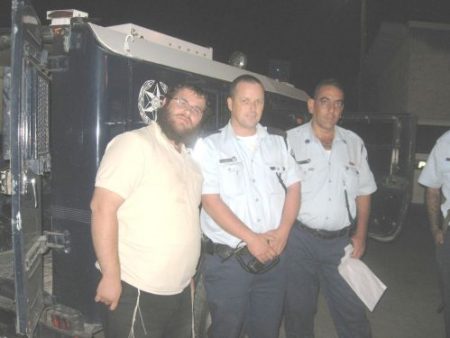 By Menachem A. Yitzchak

A 26-day drama came to an end on a recent Thursday at 2:30 a.m. with four words that cackled over the police radio: “The girls are safe.”

The story began a month ago when an Arab father took advantage of visitation rights with his two Jewish daughters, aged one and four, and kidnapped them. A year earlier, the children’s mother escaped both her marriage to an Arab and the PA-controlled village near Hebron he had brought her to. He exacted revenge by kidnapping the children.

“If you want to see the girls, you must return to the village,” he told her over the phone.

Frantic with concern over the safety of her daughters, the mother turned to Yad L’Achim, which deals with more than 500 cases a year of Jewish women getting involved with Arab men.

Yad L’Achim wasted no time in presenting the Israeli Police with the court order, but then began the bureaucratic foot-dragging. The police claimed that since the girls were being held in a village that under the jurisdiction of the Palestinian Authority, it was the Israeli army’s job to extricate them. The army claimed that it was powerless to act since it had not received an order to enter PA-controlled territory. Those poor girls had fallen between the cracks, as the chances of rescuing them became bleaker by the day.

Finally, Harav Shalom Dov Lifschitz, founding chairman of Yad L’Achim, decided that he’d had enough of buck-passing and he picked up the phone to United Torah Judaism MK Rabbi Yaakov Cohen, who has in the past intervened to help young women caught in extremely difficult situations.

Attorney Sigal Fayzekov shares her frustration and describes the sudden breakthrough in the case. “Despite a court order instructing the police to retrieve the kidnapped girls immediately and despite countless requests from our office, nothing moved for a week and a half. All we heard was that this case was civilian in nature, and therefore the authorities could not send Israeli forces into PA-controlled territory. They told us that Israel could only enter the area after receiving authority to act in these territories in accordance with international agreements.

“When we pleaded that we were talking about young girls who had been kidnapped, we were told to wait patiently, because the process of retrieving them through diplomatic channels could take a few years, depending on the cooperation of the Palestinian police. The indifference of the authorities as regards the danger the girls were in was unbelievable.

MK Rabbi Cohen’s first step was to contact the top IDF commander in Hebron, Col. Yehudah Fox, stressing the danger the two girls faced and the options for rescuing them. Then he contacted the area police chief, Deputy Inspector Avshalom Feld, who took responsibility for organizing the rescue operation. “I was in constant touch with Yad L’Achim and the security forces until the operation ended successfully,” MK Rabbi Cohen recounts. “I was always reminding them that any delay could cost the lives of two young girls.”

On a Wednesday afternoon, three weeks ago, the girls’ mother and Yad L’Achim representatives were brought to the police outpost in Gush Etzion, where police and army officials were putting the finishing touches on a rescue plan. Yad L’Achim supplied intelligence information it had obtained that the father had divided the girls and hidden them in two different locations, the homes of his wives. In order to be able to confirm the identity of the girls, it was decided to bring the mother along with the rescue forces. She would remain in the jeep, wearing a bullet-proof vest.

That night, a force of 26 soldiers and five police officers drove into the village in five jeeps. Two teams of IDF negotiators were on standby. Moments before the soldiers entered the village, one turned to a Yad L’Achim staffer and said, “We have never participated in such an emotional operation, one involving the rescue of two girls.”

Throughout all this time, Harav Lifschitz kept tabs on the operation, reciting Tehillim and ordering all the department heads at Yad L’Achim to follow his lead in staying up and praying for the success of the mission.

The forces encircled two homes in which the father lived with his wives. Though he succeeded in escaping, the forces conducted a careful search of the first house and found the four year old hidden out on the roof of the house.

They then turned to the second house, which was totally dark. After an exhaustive search they found the one-year-old in a closet, wrapped in a blanket and covered in pillows. The officer who discovered her gasped in shock into his radio after he pulled off the pillows.

The mother, overwhelmed with emotion, let out a heartrending cry when her daughters were returned to her. When the one-year-old was brought to the car, she jumped into the arms of her older sister. It turned out that the girls had been separated throughout their entire 26 days of captivity.

Once they returned to Israel-controlled territory, Yad L’Achim took the mother and her daughters to a safe house, where she was out of reach of her husband, and provided them with clothing, food and all their basic necessities.

“I’m grateful to Yad L’Achim, which spared no effort on my behalf,” said the mother. “It’s thanks to them, and their unbelievable dedication, that my daughters were rescued. What’s more, they continue to support me generously, including providing all the needs of my daughters.

“At the same time, I want to thank MK Rabbi Cohen who accompanied the rescue from the moment Yad L’Achim approached him until its successful conclusion.

“I also want to thank the Israel Police, the IDF, the security forces who participated in the rescue. I must make one final comment: Any girl that is tempted to get involved with an Arab, as I was, must know that the end will be bitter.

“I am now ready to raise my daughters like a proud Jewish woman. With G-d’s help, they will grow up as Jews, in the fullest meaning of the word.”