The Sound of Missionary Music 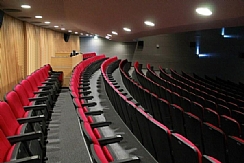 The missionaries have come up with a new tactic: They’re sending musical bands to Israel to perform songs with clear missionary messages.

Yad L’Achim’s hotline received a report that a missionary band was performing Russian-language songs in concerts all over Israel. It learned that not only were the concerts subsidized, but they were being held under the auspices of local authorities and municipalities, which allowed their official symbols to be used on notices advertising the performances.

Yad L’Achim sprang into action, dispatching teams of volunteers to Beit Yigal Alon in Tzefas, the location of the first concert, where they stood outside and warned passersby of the missionary nature of the event. Teams were also sent to the community center in Netanya, where another concert was being held.

“We scored a great victory,” said one of Yad L’Achim’s field workers. “Dozens of Jews were prevented from entering because of our warnings and many others left after the concert started because they understand that they had indeed fallen into a missionary trap.”

A leading Yad L’Achim official said: “To see so many Russian immigrants shocked and offended by the missionary preaching – and get up and leave – was moving. Suddenly, there was awakened within them a Jewish feeling and they walked out en masse.”

Yad L’Achim also launched a preventive war in Ashdod and Upper Nazareth which resulted in concerts being canceled. Those concerts were to have been held under the patronage of the municipalities.

Yad L’Achim turned to the local authorities and demanded to know to what extent they had lent a hand to these concerts and how they could justify such assistance.

“If the missionaries used the official logos without permission, we’ll insist that the local authorities begin legal proceedings against them,” a Yad L’Achim official said.

If, on the other hand, it is found that the cities did cooperate with the missionaries this must be put to an immediate stop. “We will enlist the support of every relevant agency and use every legitimate tool to block missionary campaigns of all sorts,” Yad L’Achim clarified.