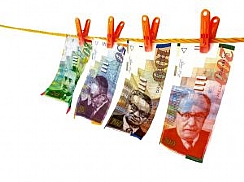 It isn’t every day that not one, but two Jewish organizations turn down a large contribution – especially in these times of worldwide economic distress.

The story begins with the Netzarim Development Fund, which aims to help Jews who were expelled from their homes in Gush Katif during the disengagement in the summer of 2005. A missionary group decided to “adopt” these Jews, who are still living in temporary homes, and transferred a sum of NIS 21,000 directly to the fund’s account.

The fund’s directors were delighted to discover the unexpected contribution in their account, but when they learned that missionaries were behind it, they took the courageous decision not derive any benefit from it. Indeed, acting on the advice of their Rav, Rabbi Yaakov Lanzer, they sent the check to Yad L’Achim so that the money would not only fail to advance the agenda of the missionaries, but would be used to battle them.

Despite the fact that reasons for leniency could be found for Yad L’Achim to accept the contribution, and despite the difficult economic straits that all institutions find themselves in these days, Yad L’Achim chairman Harav Shalom Dov Lipschitz ordered that the check be rejected.

At the same time, he issued a call to all individuals and organizations to learn from the courage of the Netzarim deportees and reject contributions from missionaries, in any form, direct or indirect, because such behavior causes chilul Hashem.

In explaining his decision to reject the contribution, even if it could have helped further the battle against missionaries, Rav Lipschitz cited a gemara in Bava Basra (10:) that disparages one who takes tzedaka from a goy, upon which it is said, “v’chessed l’umim chatas” and that it blocks the geulah.

He added: “How much more so is this true when those who are granting the charity are missionaries seeking to convert Jews from their religion.”

Quoting from the sefer Ye’aros Dvash, he said that when Achashverosh said to Haman, “the money is given to you,” his intention was that he should give the “10,000 talents of silver” to tzedakah because Achashevrosh knew that tzedakah is a merit also for the goyim. But Hakadosh Baruch Hu instructed the Jews to give half a shekel, to preempt the shekalim of Haman, so that the merit of Am Yisrael would cancel out the merit of the tzedaka of Haman and Achashverosh.

Rav Lipschitz praised the many contributors who made it possible for Yad L’Achim to fight the missionaries, canceling out the merit of of the donation of the missionaries and hastening the final redemption.