Main > Personal Accounts and Stories > Their Own Worst Enemy

Their Own Worst Enemy 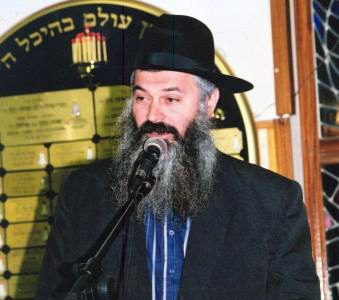 To missionaries operating in Israel, Rabbi Alex Artovski is public enemy No. 1 – and the feeling is mutual.

As head of Yad L’Achim’s anti-missionary department, Rabbi Artovksi monitors the activities of the more than 100 messianic congregations in Israel. But it isn’t enough to know what they’re doing today – which neighborhoods they are canvassing or which workplaces they have infiltrated. He makes it his business to know what they are planning for tomorrow.

And how does he obtain such information? It’s difficult to imagine him, with his black beard and classic chareidi attire, knocking on the door of, say, Beit Immanuel in Jaffa and asking its leader, David Lazarus, for a sneak preview of coming missionary attractions.

Like any army, Yad L’Achim understands that it needs accurate information to effectively fight the enemy. Scores of operatives are out in the field gleaning information and many others are in the office interpreting what it means and planning how to respond.

Part of the intelligence-gathering process involves informers at the highest echelons. The United States, Holland, Germany and Norway are major sources of funding and training for missionaries in Israel – and a source of information for Yad L’Achim.

“We have an army of informers at the very highest levels of J’s Witnesses and the Messianic Jews who give us accurate, up-to-date information,” says Rabbi Artovski.

The informers help Rabbi Artovski in two ways: They provide him with the kind of accurate information – for a price – and they shake up the higher echelons of the missionary organizations. “If eight years ago, there was an air of confidence among them, today there is suspicion,” Rabbi Artovksi explains. “They are paranoid and suspicious of one another.”

It was, for example, a tip-off from an informer that made it possible for Yad L’Achim to recently shut down a missionary center in Netanya before it even opened.

For obvious reasons, Rabbi Artovski won’t go into details about how he operates, but he gives a general picture. Say a missionary group rents an apartment in a residential building to use for classes and a base for missionary activity, a very common occurrence. Rabbi Artovski will approach the owner of the apartment, who may not be aware of his tenant’s real intentions. This is often enough to nip the planned missionary center in the bud. “Most people respond, ‘A church in my house? Never,’” he says.

Another important source of information is Jews who have been visited at home or approached by co-workers at the office who want to “save them.”

“Right now, there is a cleaning lady in the Prisons Service, a J’s Witness, who is distributing material and talking to people at the office. She almost convinced a 19-year-old girl doing her volunteer national service to convert,” says Rabbi Artovski.

What can he do about it? The first step is to turn to the employer, who in many cases isn’t aware that people on his payroll are engaged in missionary activity – on company time. “If the employer has a strong Jewish background, we will explain to him that according to halacha he is not allowed to pay a missionary, or to receive anything from him or be his partner.”

At the same time, Rabbi Artovksi approaches the person who is under the influence of the missionaries. Here, chances of success depend largely on how long the person has been involved in the cult. “If someone has been in the cult five years and has already undergone baptism, there is practically no chance of saving him,” Rabbi Artovski says. “But that doesn’t mean we don’t try.”

If the person is open to conversation, Rabbi Artovksi approaches him directly. Since Yad L’Achim is hated and feared by missionaries, he uses a fake identity. “Hi, I’m Victor,” he’ll say. “I’m really interested in what you believe in, and I want to know how a Jew gets into this.”

Rabbi Artovski has mastered the missionary material, including the verses in the Bible they falsely interpret, and says he has a 50-70 percent success rate among those who are willing to talk.

He stresses that he’s not targeting believing, church-going Christians, but Jews who have been lured into cults.

If the person doesn’t fall for the “Hi, I’m Victor,” line and refuses to meet, Rabbi Artovski has other ways to arrange a meeting, which, again, he refuses to divulge. But in general he takes full advantage of the cult mentality which encourages members to “bring a friend.”

“When they think there is a chance to convince someone to join them, they lose it,” he says. “Cults like J’s Witnesses require members to go out into the field and recruit new followers. We’re talking about an army that literally takes a map of an area and divides it up, with each pair of missionaries getting its assigned turf. They spend all their spare time going door-to-door to spread their message.”

The missionaries are careful to conceal their intentions. They dress as Jews and distribute brochures that feature Jewish symbols and that mix bon afide Jewish ideas with Christian teachings (such as a messianic-Christian ketuba and a messianic Haggada with instructions for how to make a Seder). At mass rallies held in Jerusalem’s Binyenei Ha’uma conference center, their leaders wear tallis prayer shawls and yarmulkes, giving the impression that what they are selling is Judaism.

Yad L’Achim fights back by exposing the missionaries for who and what they are. When a center opens in a neighborhood, it floods the area with flyers and rallies the neighbors to force its closure. When a major rally is planned at a convention center in Jerusalem, Yad L’Achim uses every means at its disposal – turning to the management of the center, taking out advertisements in the media, enlisting the support of the local religious council – to prevent the rally from being held. But even when it fails, and the rally is held, Yad L’Achim fights to the end to keep people from going in – because the most effective way to bring back Jews is to prevent them from falling into the missionaries’ clutches in the first place.

S.R., a Yad L’Achim field worker, was at Binyenei Ha’Uma during a recent rally. People had been bused in from all over the country by the missionaries and S.R. and her partner circulated among them as they waited to enter the hall.

“There were these two people sitting on a bench,” she recalls. “I told them to go home. One shrugged and said he had nothing better to do, and the other said he’d go home, to Bat Yam, if he had bus fare. So I gave him NIS 50 and he left. I’m going now to see him and see what we can do help him.”

The security situation and the prolonged economic crisis play into the missionaries’ hands. When people are frightened and hungry, they are receptive to new “friends who offer help. Thousands of missionaries, armed with a budget of tens of millions of dollars, are feeding on ignorance and despair. Yad L’Achim counters with an array of seminars on Judaism, especially for immigrants, many of whom are Jewishly ignorant. But how does the organization provide for the socio-economic needs of so many immigrant families?

“We don’t need to take care of every one of their problems,” answers S.R. “It’s enough to give them some attention, to show them that someone cares, and to get it into their heads that it’s better to go without water and electricity than to convert out of their faith.”

Surprisingly, it is the Jews of Sefardic origin who are the most vulnerable to the missionaries. “The Sefardim are innocent,” says Rabbi Artovski. “They never had contact with the Christian world in their countries of origin – they don’t understand the mentality. And they are warm and hospitable. Someone knocks at the door and they say, ‘Come in, drink something … ’ They get taken in.”

One of the techniques of the missionaries is to enter into a dispute. “You know that it doesn’t say anywhere in the Torah that you have to light Shabbos candles,” they’ll say, as a means of drawing the intended victim into a theological debate – one for which he is ill-equipped due to lack of Jewish education.

The irony is that most of these victims are thirsting for something spiritual and instead of being lost to Judaism through cults could easily be won over to further commitment to their own heritage. “They are more open than the average Israeli on the street,” says S.R. “They are in the midst of a spiritual reawakening and the problem is that they think what they’re getting from the missionary is Judaism.

“By the time we’re done with them, they want Torah classes, which Yad L’Achim provides through a wide network of outreach programs,” she says.

Where does S.R., a religious woman who spends so much time around missionaries and their victims and among people who are truly destitute, get her strength?

“We work in the height of tuma,” she say. “You need the skin of an elephant and you need to pray for the strength to stand up against them.”