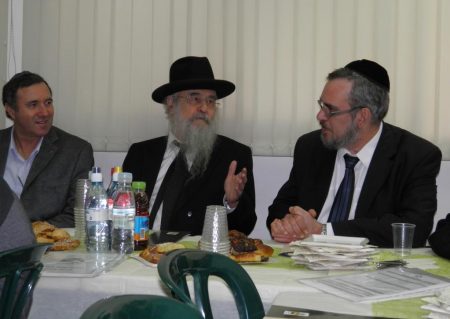 “I was simply astonished by the scope of the rescue work you do,” Nachum Itzkovitch, director general of Israel’s Welfare Ministry, told Yad L’Achim officials last week during a visit to the organization’s Bnei Brak headquarters.

Itzkovitch was accompanied on his visit by Bnei Brak Mayor Rav Yaakov Asher, who added: “People have to come here to visit, to see with their own eyes what you do . It’s unbelievable!”
Itzkovitch, Rabbi Asher and other top welfare officials came to Yad L’Achim to get a closer look at the problem of assimilation and intermarriage and what is being done about it.
They were briefed by Yad L’Achim chairman Rav Shalom Dov Lifschitz, deputy chairman Rav Yisrael Lifschitz and director general Rav Yossi Ganz, who revealed that Yad L’Achim’s hotline receives an average of seven calls a day regarding Jewish girls who have gotten involved with Arab men.

The Welfare Ministry director general was shocked to learn how young these girls are when they get involved in problematic relationships.
After being briefed by Yad L’Achim’s top officials, Itzkovitch met with the social workers who work directly with the girls and heard about the distress and what is being done to alleviate it. He then met with a Jewish girl who was recently rescued from an Arab village; she shared her painful ordeal and her joy at being rescued by Yad L’Achim staffers who risked their lives to bring her to safety.
The delegation of top welfare officials left the office with a deeper understanding of the scope of the problem of intermarriage in Israel, its underlying causes and what needs to be done to address it.