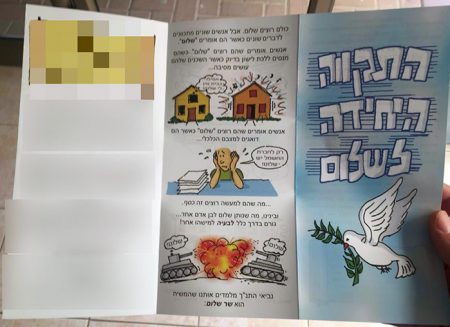 Missionaries recently distributed thousands of flyers in mailboxes throughout Petach Tikvah, in the center of Israel. Outraged residents called Yad L’Achim which quickly dispatched activists to the area to expose the missionaries and distribute their own material to counter them.

Yad L’Achim officials this week cited new figures confirming that missionary activity is more intense in Israel than in most of the world. “The missionaries are dedicating much energy and resources to getting Jews to convert to Christianity and see this is a great achievement,” said Rabbi Shmuel Lifschitz, one of the heads of Yad L’Achim.

“The missionary campaign in Israel is based mainly on the large Christian cults like ‘Messianic Jews’ and ‘J’s Witnesses,’ and dozens of smaller ones.”

These cults are motivated by their belief that converting Jews to Christianity will bring the “revelation” of J. as messiah, in keeping with their doctrine. Activity that is done out of ideological fervor is particularly dangerous, a Yad L’Achim official emphasized.

This is why the counter-missionary organization is investing resources and trained manpower to identify the populations the missionaries have targeted, in order to engage in preventive work. This includes alerting residents to the dangers and distributing educational material that explains the missionaries’ goals and tactics.

“It happens that in Petach Tikvah we were talking about material distributed by the fundamentalist missionaries, ‘Messianic Jews,’ whose people use Jewish themes to get innocent Jews to convert to Christianity,” Yad L’Achim said in a statement.

“Regretfully, there are those acting to torpedo a law that would ban distribution of material by cults and therefore while the missonaries’ actions are very problematic they aren’t illegal.”

Yad L’Achim is calling on the public to be on guard against such activities. “Should anyone be confronted with missionary material of this kind, or any other, he should turn to Yad L’Achim so that we send activists to warn residents of the dangers.”