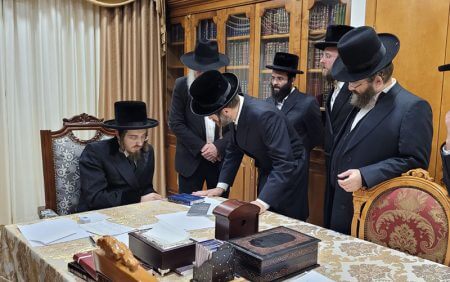 The delegation visits the home of the Sadigura Rebbe

A delegation of senior Yad L’Achim officials visited the homes of Gedolei Yisrael in recent days to seek their advice on a number of pressing issues and to receive their blessings for success.

The delegation began by visiting the Beis Din of the Eidah Hachareidis in Yerushalayim, where they were received warmly and given time to discuss fateful questions, despite the frantic schedule of the dayanim.

Harav Chaim Deutsch, a senior lecturer at Yad L’Achim, gave a detailed overview of the organization’s wide-ranging rescue activities, leading the dayanim to comment that in addition to their annual appeal to the public to donate to Yad L’Achim on Erev Parshas Zachor, they would take further steps to support Yad L’Achim’s vital activities.

On hearing of the difficulties activists encounter in trying to bring lost Jewish souls back to their source, Harav Yehudah Fisher, a member of the Badatz, shared with the visitors an amazing segulah he had received from his father, Harav Yisrael Yaakov Fisher, zt”l, the previous Raavad of the Eidah Hachareidis. The segulah, handed from generation to generation, has been shown to help in bringing sons back to the ways of their fathers.

At the conclusion of the meeting, the dayanim were presented with a list of names of Jewish children – whose mothers are Jews and fathers are Arab – who have been enrolled in religious Jewish school over the past two years. Seeing the juxtaposition of Jewish first names with Arab last names gave the dayanim a deeper appreciation for what Yad L’Achim is up against.

The delegation then visited the home of the Sadigura Rebbe who was briefed by Harav Chaim Eisenberg, a senior Yad L’Achim official, on the organization’s successes in saving Jewish souls from Arab villages and the scope of the investment that is necessary to bring survivors’ children to Jewish education, al taharas hakodesh.

Afterwards, the admor heard a survey from Harav Yoav-Zeev Robinson, head of the counter-assimilation department, on the organization’s unrelenting battle to save errant Jews from marrying out, and on the struggle against the missionaries.

Members of the delegation were surprised by the admor’s penetrating questions regarding the activities of the missionaries and the way he explored in great depth Yad L’Achim’s strategies for countering them.

The delegation also visited the home of the Dushinsky Rebbe. As they entered, the admor expressed his respect and appreciation for the rescue work of Yad L’Achim and its leaders.

The admor was shaken to hear that missionaries in Israel were investing hundreds of millions of dollars to ensnare Jews, and pleaded with the officials to bring this information to the general public so that people will participate, with their money, in the fateful battle for Jewish souls.
An additional visit was paid to Hagaon Harav Shaul Klein, the Rav of the Or Hachaim neighborhood of Bnei Brak and one of the city’s leading poskim.

Harav Klein spoke with great emotion about the special relationship he enjoyed for more than 20 years with Yad L’Achim’s founder, Hagaon Harav Shalom Dov Lifschitz, zt”l. He related that they had met frequently on halachic matters that were related to saving lives, literally.

When the members of the delegation laid out Yad L’Achim’s wide-ranging promotional activities – aimed at containing the missionary plague and preventing intermarriage – the Rav surprised them with a story of how he had witnessed first-hand the results of their dedicated efforts.
“The story showed me again the importance of your work and the need to strengthen your hands in any way possible,” he said.

Yad L’Achim officials said: “The warm reception, the support and encouragement of these exalted Rabbanim, gives us the strength to continue our activities, despite the difficulties, to save more and more Jewish souls and return them to our people.” 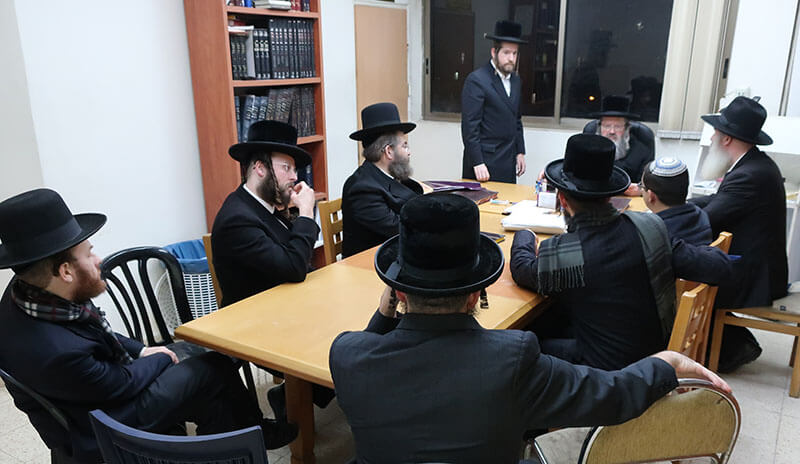 A visit to the home of Harav Moshe Shaul Klein 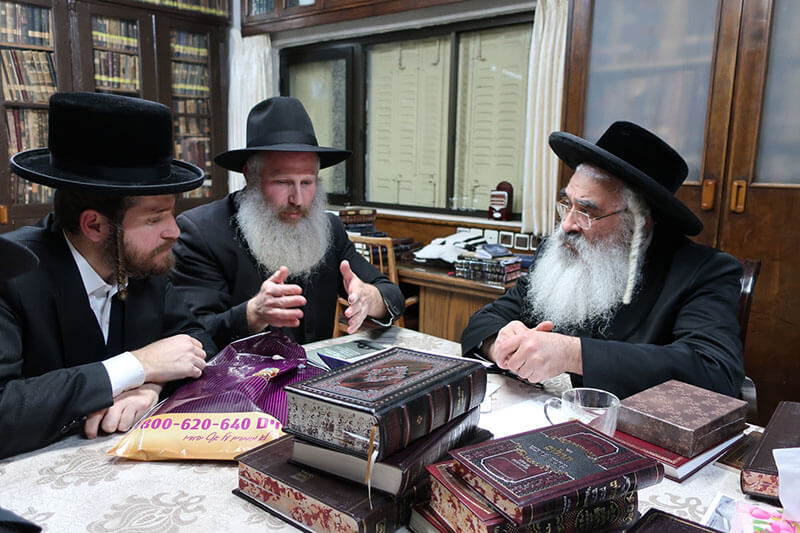 A visit to the home of the Dushinsky Rebbe 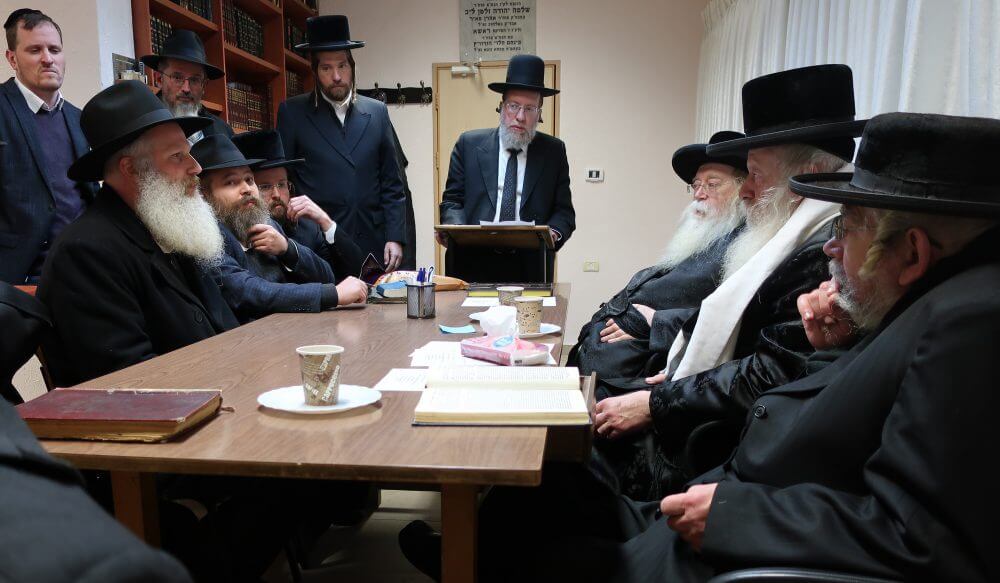