Hundreds of missionaries, members of the “Messianic Jews” cult, spread out across Israel on chol hamoed Sukkos, taking up positions in city centers thronged with Jews taking advantage of the holiday for family outings.

In Jerusalem, the missionaries out in force at the Mamilla mall leading to the Old City, offering their spiritually poisonous material to Jews heading to the Kosel. They were also a presence at the Central Bus Station, Safra Square, Sachar Park and at festive parade attended by thousands.

The chutzpah of the missionaries knew no bounds, as they even set up a sukkah on Jaffa Road, at Haturim Street, and invited unsuspecting passersby to come in – only to be offered missionary material.

Zion Cohen, a Yad L’Achim activist who was summoned to the site, was shocked to discover that the missionaries had succeeded in luring his 12-year-old nephew, who lives in the area, into the sukkah with sweets. The police were called in, since it is against the law to preach to children, and warned the missionaries that they would be arrested if they continued their activities. The threat was enough to get them to pack up and leave.

The missionaries’ deceptive tactics included having two of them walk around with large kippahs on their head and a lulav and esrog in their hands, which they offered to passersby. Incredibly, they took advantage of this exchange to preach Christianity.

Yad L’Achim’s switchboard was swamped with calls from Jews complaining of being accosted by missionaries at festive events in Haifa, Ramat Gan, Bat Yam and Netanya. The organization had prepared for the missionary onslaught, based on previous years’ experience, and had prepared teams that could be dispatched immediately to any trouble spot.

Summing up its success in blunting the missionary offensive, Yad L’Achim noted with satisfaction that the general public had shown utter disdain for the missionaries and spontaneously rejected any contact with them.

“You could see clearly that the Jewish heart is beating strong,” said Rabbi Binyamin Walkman, who coordinated the effort. “Am Yisrael said ‘no’ to the Christian missionaries. And the missionaries got the message.” 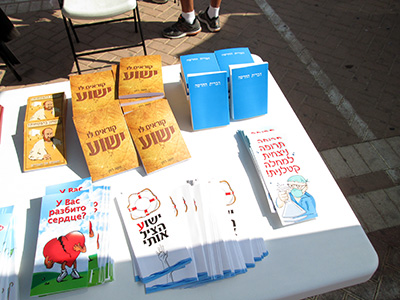 Caution, dangerous material. A missionary stand at a crowded event