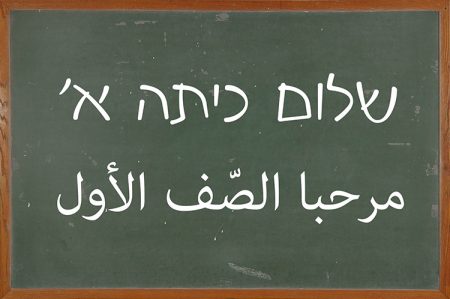 The danger of the new assimilation. A mixed school

An article published in Haaretz points to a worrisome increase in the number of students learning in bilingual kindergartens and elementary schools that bring together Jews and Arabs.

The article is based on research done by the Knesset at the request of MK Yousef Jabareen (the Joint List) that points to a 60 percent increase in mixed learning over the past five years, to 1,700 students.

The most significant increase is among kindergarteners, which jumped hundreds of percentage points. Five years ago there were 80 children learning in kindergartens run by the non-profit Yad Beyad organization, which runs most of the bi-lingual educational programs. This year, there are 15 Jewish-Arab kindergartens, with 470 children.

An activist quoted in the article encouraged the opening of more such institutions, adding that the Education Ministry does nothing to get in their way.

In response, Yad L’Achim sent an urgent letter to the Education Ministry demanding that it put a stop to the phenomenon.

“This is dangerous for Israel’s Jewish identity since such programs help lay the groundwork for intermarriage,” the letter said. “Mutual respect is an important value, but we must recognize that mixed settings, be they at school, the workplace or in recreation, are breeding grounds for assimilation. It is absurd for the government to act abroad to prevent assimilation, while encouraging assimilation at home by supporting these institutions.”

Besides the problem of assimilation, which cuts Jews off the from the G-d of Israel and their people, Yad L’Achim points to the thousands of Jewish girls who married Muslims and came to regret it. Many required welfare assistance and even rescue to a safe haven due to the extreme violence they suffered at the hands of their spouses.

“Coexistence whose meaning is assimilation is a disaster for the Jewish people, plain and simple. This isn’t coexistence, but denial of Jewish existence,” Yad L’Achim officials said this week in a statement. “It is dangerous to create a situation in which it is legitimate to create a social bond between Jews and Arabs of the opposite sex that can lead to marriage.

“We are not speaking in slogans. Whoever is upset at our ‘extreme’ stand should contend with the 8,000 cases of assimilation that reached our doors in the past decade alone. It is therefore crucial that we eradicate the legitimacy given to mixed education, which to our sorrow is increasing already at the age of kindergarten. If we want to protect our Jewish identity, there is no place for this.
“Tolerance, yes, assimilation, no.”

“A disaster for the Jewish people.” The letter sent by Yad L’Achim to the Education Ministry