“Chosen People Ministries” – a missionary organization that was set up in the United States more than 100 years ago – turned to its Christian supporters this week with a request for assistance in absorbing Jewish families that escaped from Ukraine to Israel. In its request, the organization declares its intention to hold a large, centralized baptism for them on Erev Pesach, Yad L’Achim revealed.

The organization maintains three churches in Israel – in Jerusalem, Ramat Gan and Bat Yam – which are active in converting Jews out of their religion. The missionaries pretend to be Jews in order to mislead their victims.

In their appeal, the missionaries write: “We set up an aid fund for Jews who were caught in the conflict between Russia and Ukraine. We are helping with food, lodging and transportation to those who managed to escape to the western part of Ukraine. We even hope to help some of these precious souls make it to Israel.”

In the letter, the missionaries refer to their activities with Holocaust survivors who lived through the horrors of World War II and moved to Israel to live as Jews: “If the Russia-Ukraine conflict ends quickly, whatever monies are left over in the fund will be applied to our work with elderly Holocaust survivors in Israel. Most of these speak Russian, and many are from Ukraine.”

The punch line of the missionary letter declared the group’s intention to hold a mass baptism before Pesach, R”l. “Nerya Arbov [one of the senior missionaries in Israel] has dedicated much time and effort to helping four Ukrainian families who escaped the war zone to move to an apartment in Israel. He writes: Not only did we meet them at the airport, but we also found them apartments that we furnished. These people have participated in meetings of our congregation and some have already accepted Yeshu. Before Pesach we plan to baptize 15 people.”

A senior Yad L’Achim official said: “They won’t succeed. We will stay in contact with Rabbis in Ukraine and with absorption enters in Israel to ensure that the missionaries do not take advantage of the distress and won’t be able to put their hands on innocent Jews escaping the war, in the hope and prayer that we will succeed in thwarting the missionary plot.” 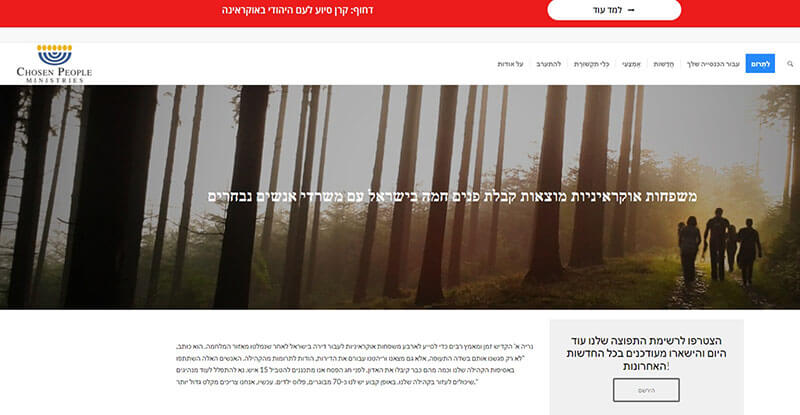 They themselves testify to their devious plans. A declaration proclaiming the missionaries’ intentions