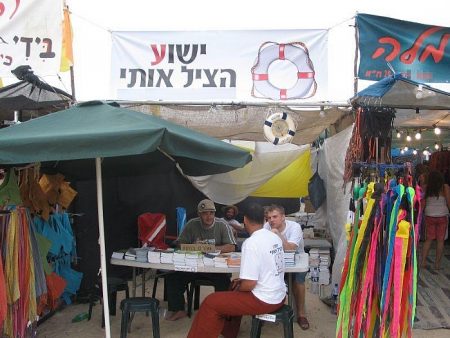 The summer-like weather this Sukkos brought thousands of young people to the Kinneret for Chol Hamo’ed. Unfortunately, it also attracted some 400 missionaries, including 200 who were “imported” from the United States.

As soon as Yad L’Achim learned of what the “Messianic Jews” were up to, its chairman, Rabbi Shalom Dov Lifschitz, dispatched dozens of activists to the scene to blunt the missionary offensive. The activists were stunned to discover that a “brigade” of missionaries had taken up positions throughout the huge Breishit festival that had been set up for visitors.

Yad L’Achim’s team, headed by Rabbi Avraham Bitkin, worked around the clock for three days to alert Jews in the area as to the real intentions of the friendly, clean-cut strangers who just wanted “a minute of your time.” They kept close tabs on the missionaries and tracked down all of the impressionable young Jews who came into contact with them.

“In every instance in which a missionary succeeded in engaging a Jew, we made sure to reach the youngster give him the whole picture,” said Rabbi Bitkin. “We were engaged in a defensive PR campaign that succeeded beyond all expectations.”

Moreover, Yad L’Achim called the police when they spotted missionaries approaching minors under the age of 18. “Though, incredibly, there aren’t effective laws against missionizing in Israel, there is a law against trying to influence children to change their religion,” said Rabbi Bitkin. “In several instances, we filed complaints with the police that led to missionaries being detained.”

Police also had to be called in when some missionaries, furious at Yad L’Achim activists for warning people away from them, assaulted one of the activists. Yad L’Achim’s legal department announced that it would file formal complaints with the police and ensure that the matter be pursued.

A giant screen was set up at the park on which a Yad L’Achim produced film warning of the dangers of missionaries was shown. Thousands of young people gathered to watch the film, while others heard the narration over the park’s powerful loudspeakers.

Most important was the personal contact made by Yad L’Achim staffers with thousands of young people in which they explained that missionaries and cults are the enemies of the Jewish people. In long conversations that sometimes stretched late into the night, these youngsters heard for the first time what being a Torah Jew means and why missionaries are determined to deny them their heritage. Hundreds of young people left contact information with Yad L’Achim.

Rabbi Lifschitz praised the dedication of Yad L’Achim activists, who had been forced to spend Yom Tov away from their families in order to save Jews. He also stressed that the list of names that was acquired at the event would be used to help “finish the job” and bring these young people to lead fuller Jewish lives.

“It isn’t enough to stop the destructive activities of the missionaries,” he said. “Our goal is to see to it that these children, who could so easily have been deceived into converting out of their religion, are brought back to Judaism and to Torah and mitzvos.”