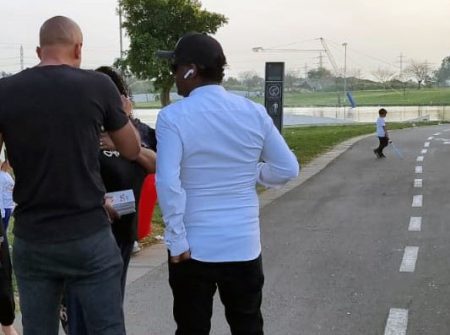 Missionaries belonging to the “Messianic Jews” cult spread out last Thursday and Friday to major parks in the Dan region and tourist sites in the north, seeking to take advantage of the Yom Ha’atzmaut holiday to preach to Jews to convert to Christianity. However, they were stymied by Yad L’Achim activists who had prepared ahead of time to be able to reach trouble spots in time.

The recent wave of missionary activity began during Chol Hamo’ed Pesach, when Yad L’Achim received hundreds of calls from hikers at tourist sites in the Galilee and the Golan reporting the presence of missionaries harassing visitors and leaving pamphlets on cars parked in the area. Yad L’Achim volunteers dispatched to the area confirmed the identity of the missionaries and warned away passersby.

A thorough investigation by Yad l’Achim found that the man behind all of these activities was Andrew Lewis, a leading missionary who is well known to the organization. Lewis was banished by his community in the wake of an information campaign about his activities launched by Yad L’Achim. He lowered his profile for a while, before resuming his activities full-scale.

Yad L’Achim’s counter-missionary department predicted that missionaries would try to take advantage of the Independence Day holiday, when millions of Jews are out on hikes. It placed its activists and volunteers in areas that were likely to attract missionaries and prepared them to intervene, if necessary.

The intensive preparations paid off, as activists were able to respond quickly to calls – whether from the north or from parks in Tel Aviv and Ramat Gan – and to get the missionaries to leave via legitimate means. The activists appraised passersby as to the true identity and motives of the “friendly faces” and the nature of the deadly material they were distributing.

Yad L’Achim officials stressed that “despite these days of polarization, we received warm responses from everyone, including non-observant Jews who were disgusted by the missionaries and grateful for our intervention.”