Main > Intermarriage and life-threatening situations > Youth Raised as Muslim Returns to Judaism, Thanks to Yad L’Achim

Youth Raised as Muslim Returns to Judaism, Thanks to Yad L’Achim 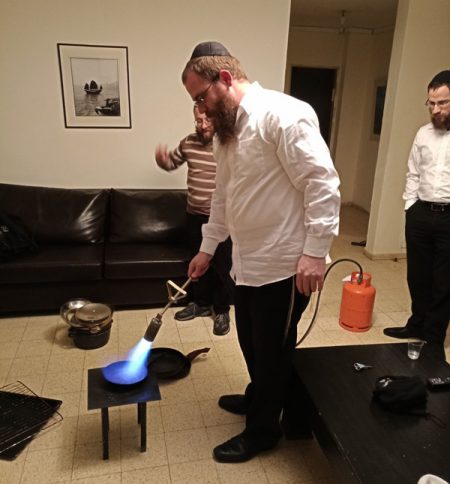 The picture attached to this article appears commonplace: It’s a kitchen in a Jewish home somewhere in Israel being koshered, something that happens dozens of times a day. But the story behind this picture is breathtaking: H., 21, the tenant who lives in this apartment, was raised as Muhammed in an Arab neighborhood in northern Jerusalem.

“I grew up in a completely Muslim home, I spoke Arabic, I prayed five times a day,” he says. “My father raised me as a good Muslim and never spoke about my origins from my mother’s side.”
But things came to a head one day. H., who was employed as a construction worker in the center of Jerusalem, knew a number of Jewish workers, and when one of them heard about his mother’s origins, he surprised him by announcing that it meant he was Jewish in every sense.

“I thought he was talking foolishness, but his words didn’t give me peace,” H. said. “I am very connected to the image of my mother, and therefore wanted to know if I am really a Jew like her, or whether it was the foolishness of a Jew who was just pulling my leg… I checked into the matter in great depth and was shocked to discover that he was right. Just to be sure, I checked to see how I was listed in the Interior Ministry Population Registry and when I saw that I was registered as a Jew, I understood that this was stronger than me, and I had to do something.

“Even though my life was going well from every vantage point, I understood that I had to stop everything and find out what Judaism is and how I could connect to it.”

H. asked his Jewish friend for help and was referred to the Yad L’Achim hotline, which he immediately put him into the devoted care of Rabbi Yoav Zeev Robinson, head of the counter-assimilation department.

“Our department is used to dealing with pressing matters, and within an hour I was on my way to Jerusalem to meet with H.,” Rabbi Robinson relates.

One meeting led to another and the two quickly formed a soul connection. Rabbi Robinson shared his vast experience with young people suffering similar identity crises.

They began to learn together and delve into the meaning of being a Jew. H. was exposed to a new world that had been forcibly kept from him. He moved into a rented apartment in the center of Jerusalem and began drawing closer to Judaism. He even met with his mother’s mother and other relatives.

This week, in response to threats from his Arab family, H. concluded that he had to leave Jerusalem. Yad L’Achim helped him rent an apartment in a city in the south of the country. The first thing he did upon entering the apartment was to kosher the kitchen.

“I want that the food that enters my mouth should be kosher, just as the Torah instructs us,” he concludes.