Yusuf/Yosef Has his Bar Mitzvah 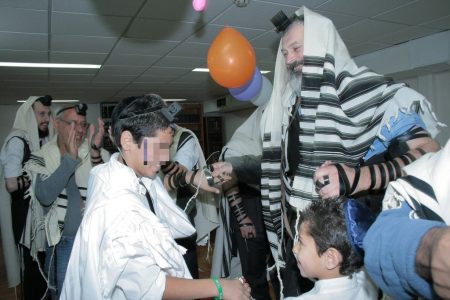 It’s hard to believe that the Bar Mitzvah boy who proudly stepped up to the Torah last week was only recently living as an Arab in the Muslim Quarter of Jerusalem’s Old City. Yosef was Yusuf, and didn’t speak a word of Hebrew, much less contemplate a life of Torah and mitzvos.

“This is a milestone in the life of Yosef and his family,” said Rabbi Alex Artovsky, the senior Yad L’Achim official who coordinated both Yosef’s rescue 18 months ago and his Bar Mitzvah. “His seven brothers and sisters are sweet Jewish children, whose eyes shine with love of Hashem and who recite the Shema and brachos with reverence.”

Yosef’s dramatic rescue was captured on film by one of Israel’s leading news programs, which sent a crew to accompany Rabbi Artovsky and his team from the planning stage, to the heart-stopping race in and out of the Muslim Quarter, and concluding with the moment when the children were out of danger and being reassured by Rabbi Artovsky that a new life awaited them.

But giving them a new life proved more difficult than anyone imagined. Yosef and his siblings had been raised in a state of utter neglect. There home was a hovel and the children, who lived in fear of their father, were given none of the manners and sensitivities that children who grow up in healthy families receive.

Yosef’s story begins with his mother, N., who got involved with an Arab some 18 years ago, shortly after being orphaned from her mother, a Holocaust survivor. The Arab convinced her to move in with his family in the Muslim Quarter, where she would receive the emotional support she so needed.

Instead of support she got abuse, and after having eight children she realized that the only way out was to call Yad L’Achim’s hotline. Shortly thereafter her husband was jailed for criminal activity, providing the rescue team with a golden opportunity.

Once the family was in a safe house, Yad L’Achim went to work helping the children learn not only Hebrew, but basic manners and practices that would let them fit in with regular Jewish chidlren. With an iron will and exemplary patience, Yad L’Achim staffers, working with social workers and officials from the Welfare Ministry, helped the family make the transition. The decision was unanimous to enroll the children in a religious boarding school, whose staffs were given extra professional assistance to deal with the challenge.

The results of these efforts could be seen last week at the Bar Mitzvah of Yosef, N.’s oldest son. Yosef himself was moved to tears when he wrapped his Tefillin around his finger and said, “and I betrothed to You forever.” The family thanked Yad L’Achim for making it possible for them to rejoin the Jewish people.

But the emotional highlight of the celebration was when Yosef went up to Torah, to the sound of singing of the congregation, and recited his brachah: “Who chose us from among the nations and gave us His Torah.”

Speaking at the Bar Mitzvah banquet, Yad L’Achim chairman Harav Shalom Dov Lipschitz noted that the merit of N’s mother, a Holocaust survivor, had stood the family in good stead. “The soul of the grandmother, who withstood with courage the terrible events of the Shoa and who went up to the Heavens in a storm after a difficult illness, is happy and content in these moments, when she sees her grandson take major strides in Torah.”
Harav Lipschitz blessed the Bar Mitzvah boy that he continue to grow, together with his brothers and sisters, in the ways of the Torah.