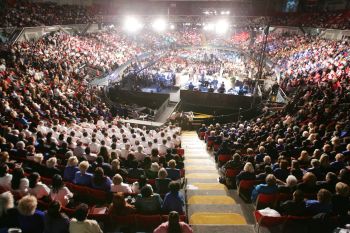 Ironically, Jews who live in Israel are the most vulnerable to missionaries. That’s because missionary groups see making inroads in the Jewish homeland as a special achievement and therefore invest tremendous energy and resources there. The missionary infrastructure in Israel is based mainly on a few large Christian cults and dozens of smaller ones.

It is important to understand that that the missionaries are driven by ideology. They believe that their success at converting Jews will hasten the revelation of J. as the messiah. Thus, their activities are characterized by an ideological fervor, a sense that they are working toward an altruistic goal, which makes them more difficult to contend with.

Moreover, it is vitally important to remember that any assistance provided by missionary organizations, as innocent as it might appear, ultimately leads to one thing: Jews joining up with Christianity.

In our battle against the missionaries we are even more motivated. We see the saving of each and every Jewish soul from Christian cults as a sacred mission. This is what drives Yad L’Achim’s relentless efforts against the mission and its members.