Main > COUNTER MISSIONARY > How Does the Department Work?

How Does the Department Work? 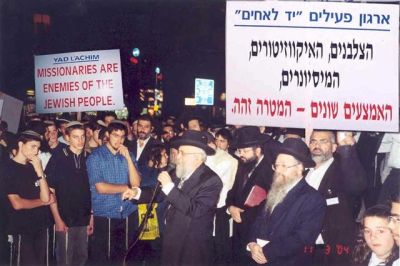 We fight the missionaries in a variety of ways, some of which, due to their sensitive nature, can’t be described in detail.

One of our most important functions is to track the activities of missionaries and respond to them in appropriate ways. We are updated every time the missionaries schedule a conference, open a new center or schedule a baptism for Jews in the Kinneret and have a variety of means – all of them legal – to foil them. When we receive a report of a family that has gotten caught up in a cult we intervene with tried and tested methods.

We establish contact and begin a series of meetings aimed at discovering what caused these Jews to seek assistance from the cults and help them make their way back to the Jewish people.

We also offer economic support and counseling for families or people in distress who have been snared by the missionaries in their moment of weakness.

In the fight against missionaries, prevention is as important as intervention, if not more so. We run programs that strengthen awareness of Judaism among Russian immigrants. These include a growing network of Torah classes around the county, as well as seminars and Shabbatons for Russian immigrants.

We have also been very effective in organizing protests in neighborhoods that have been infiltrated by missionaries. These alert local residents as to the nature of the “innocent” classes being offered at an apartment on their block that has been rented by missionaries. These protests have led to the cancellation of classes, the removal of missionary centers, the prevention of baptisms and an awareness among the general public as to the extent of the problem.